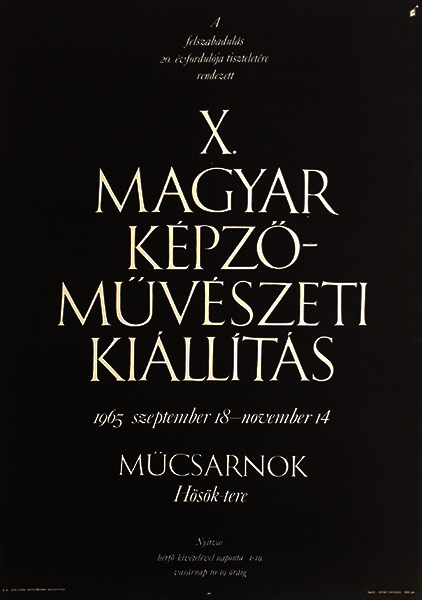 The poster is black and white, very simple, yet decorative. The information on it contains nothing more than needed: title, opening hours, time and place of the advertised event. The exhibition took place in 1965 between Sptember 18 and November 14, in Kunsthalle. The text on the top says that the exhibition is held for the occasion of teh 20th annyversary of the liberation of Budapest.

This refers to the end of World War 2 for Hungary. Germany occupied Hungary in 1944 March in order to force the Hungarian government to cooperate with themm. Then the siege of Budapest started in 1944 December against the Soviets. After a long and bloody siege the ASoviets managed to take over in 1945, hence the Germans left the country. During Socialism this date had to be called liberation, although most people considered it an occupation as the Soviets did not leave the country after defeating the Germans but stayed in the country until 1989. However, when Hungary was ruled by the Soviet Union many historical events were altered, and the liberation-occupation debate was one of the many.