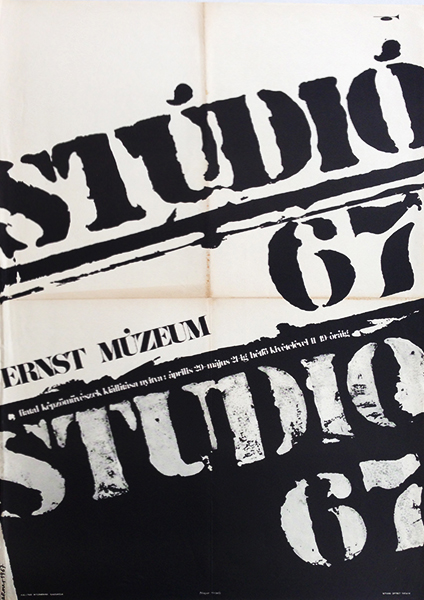 Fine, light fold marks and wear, some creasing and discolouration.

Poster for the famous exhibition of 'Fiatal Képzőművészek Stúdiója' (Studio of Young Fine Artists) in Ernst Museum in 1967. The exhibition was cancelled at the end, but the decision was not clarified until the very last minute, therefore, the poster promoting the event had been printed.

The formation of the Studio started in the second half of the 1950s, when artists did not have to apply the socialist-realist style so strictly as in the previous years. Young, freshly graduated artists joined the group who were very active and full of aspirations about getting back their freedom after the darkest years of communism. However, the hopeful period quickly ended after the planned exhibition of 1967, when, due to inner conflicts, the Studio ceased to exist. The reasons for the conflicts are still unknown, the only known fact is that the leaders of the group had opposing opinions: one part wanted to preserve the radical attitude of the studio but others decided to transform it in a way that there would be no doubt that the cencorship would approve.

The exhibition advertised by the poster is legendary because, according to the memories, the leaders of the Studio were on the same point of view up until the planned time of the 1967 exhibition. Just like the Studio's exhibition in the previous year, a committee was suppossed to be involved in the organization, but a part of the artists of the group took stand against the leadership and managed to cook the idea of the exhibition as well as getting a new management for the Studio. As a result, an important period in the Studio's life was put to an end. The leaders before 1967 were: József Bartl, János Fajó, Károly Jurida, László Lakner, Miklós Melocco, Gyula Meszes Tóth, László Miskei, István Gy. Molnár, Imre  Veszprémi. The vice chairman was Lajos Sváby.

The reasons for the Studio breaking up is still being researched by art historians. This poster is not only a very decorative, minimalist piece, but also a rare document of an event significant both from a historical and art historical perspective.