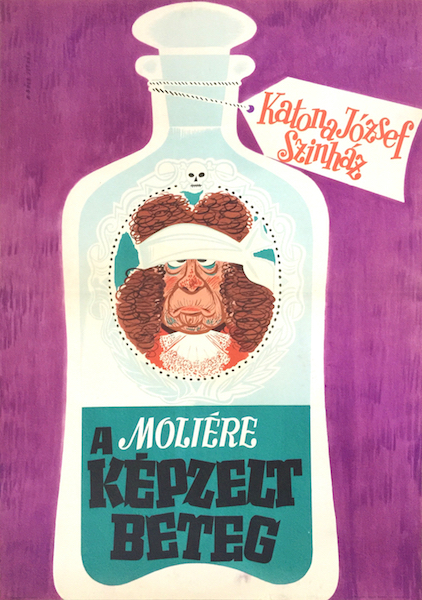 Comedy in two acts directed by Tamas Major and Zoltan Varkonyi. Premiered in Budapest on December 10, 1954 at the Katona Jozsef Theatre.

The Imaginary Invalid (French: Le malade imaginaire) is a three-act comédie-ballet by the French playwright Molière with dance sequences and musical interludes by Marc-Antoine Charpentier. It premiered on 10 February 1673 at the Théâtre du Palais-Royal in Paris and was originally choreographed by Pierre Beauchamp. The play is also known as The Hypochondriac, an alternative translation of the French title.

Molière had fallen out with the powerful court composer Jean-Baptiste Lully, with whom he had pioneered the comédie-ballet form a decade earlier, and had opted for the collaboration with Charpentier. Le malade imaginaire would turn out to be Molière's last work. He collapsed during his fourth performance as Argan on 17 February and died soon after. (source: wikipedia.org)