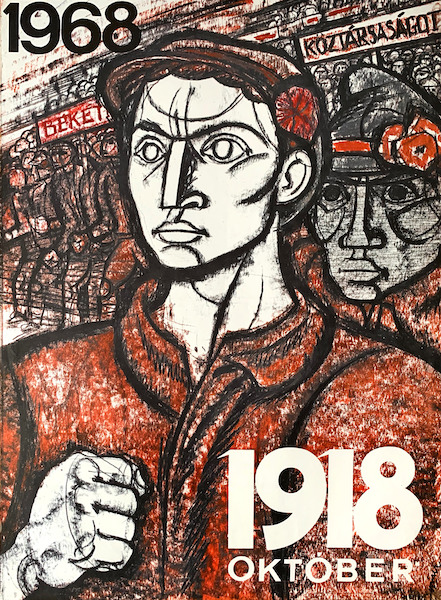 A special and important poster by Gyula Hincz from 1968.

Gyula Hincz was a highly versatile artist. He invented a special unique drawing style that united very different influences: the art of Picasso, Cubism, Surrealism, the style of Japanese woodcuts, Classicism and Mannerism.  He worked as a painter and stage designer as well, and he also worked on illustrations and monumental decoration works. He had a unique talent in drawing.

This is one of his few posters, and it was reproduced many times in publications about Hungarian propaganda poster art. It was created for the 50th anniversary of the revolution of October of 1918.
"On the 28th October there was a mass demonstration in Budapest demanding Hungarian independence. On the 29h October, Hungary was declared a republic. And on the 30th of October there was an uprising in Budapest. The government fell like a house of cards without firing a shot in its own defence. The streets were taken over by the insurgents shouting slogans such as “Down with the counts!"…"No more war!"…"Only the soldiers' council gives the orders!" By the nightfall of October 31st the insurgents had occupied all strategic positions, and freed all the political prisoners. The Revolution had triumphed swiftly and painlessly."
(source:libcom.org)

The revolution was also called "Aster Revolution" because of the fact that soldiers put aster onto their hats, right to the place of the rose motif with the monogramme of the Austrian emperor. Aster became a symbol of freedom for Hungarians who wanted to be independent. That's why this flower is also captured in this poster, it appears on the cap of the central character of the design.

The Aster Revolution or Chrysanthemum Revolution (Hungarian: Oszirozsas forradalom) was a revolution in Hungary led by Count Mihaly Karolyi in the aftermath of World War I which led to the foundation of the short-lived First Hungarian People's Republic. The revolution received its name because the citizens and demobilized soldiers in Budapest began placing the aster flowers in their hats and caps to symbolize support for the social democratic Hungarian National Council (HNC) and Count Karolyi. Karolyi had helped establish the Hungarian National Council which demanded the secession of Hungary from the Austro-Hungarian Empire. In the early morning hours of 31 October 1918, with support of the soldiers from the Hungarian Army, HNC protesters wearing asters helped seize public buildings throughout Budapest. Prime Minister Sandor Wekerle resigned and former Prime Minister Istvan Tisza was murdered. By the end of the day, King Charles IV was forced to accept the coup and Karolyi became Hungary's new Prime Minister. Karolyi then terminated the Compromise of 1867, thus formally dissolving the Austro-Hungarian union. Karolyi yielded to U.S. President Woodrow Wilson's demand for pacifism by ordering the disarmament of the Hungarian army. This happened under the direction of Bela Linder, minister of war in the Karolyi government. Due to the full disarmament of its army, Hungary was to remain without a national defence at a time of particular vulnerability. The Hungarian self-disarmament made the occupation of Hungary directly possible for the relatively small armies of Romania, the Franco-Serbian army and the armed forces of the newly established Czechoslovakia. During the rule of Karolyi's pacifist cabinet, Hungary rapidly lost control over approx. 75% of its former pre-WW1 territories without armed resistance and was subject to foreign occupation. In March 1919, the republic was itself overthrown by a Communist putsch, which established the Hungarian Soviet Republic. Soviet Hungary soon collapsed due to internal discontent and a Romanian invasion and, after a brief revival of the People's Republic, the monarchy was restored, now as an independent country.