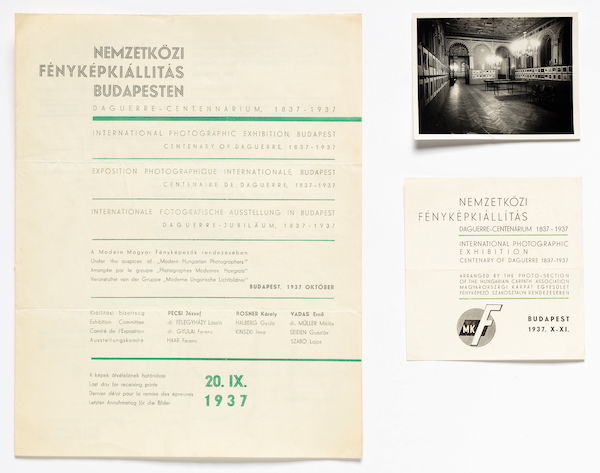 The group was formed after some members decided to leave the Hungarian Amateur Photographers National Association in 1937. These photographers were committed to "new photography" which was close to the principles of Neue Sachlichkeit or New Objectivity and the Bauhaus.

The Hungarian photography journal, Fotoélet described their aims: "Modern Hungarian Photographers Group is not an association in the classical sense, only a loose framework that wishes to educate the members and help the exchange of views and ideas with the exclusion of all formality. We don't swear by any trend, because we are convinced that each photographer has to find their own style through their personal approach and perception, to avoind using ready-made templates, through promoting independent judgment and stand-alone vision. The word "modern" does not mean that a photographer wants to swim with prevailing fashionable currents, but that he or she wants to be contemporary, and wants to see and know this world we live in..."

The group's most important achievement was the exhibition in 1937. The group was led by Imre Kinszki, and included some of the most important Hungarian artists and theorists of this medium besides him: József Pécsi, Károly Rosner, Ernő Vadas, Dr. Ferenc Gyulai, Ferenc Haár (Francis Haar). This was the first occasion that a work by André Kertész was exhibited in Hungary, a piece from the famous series "Distortions".

Earlier, most of these artists achieved important results in modernist photography. The group was able to represent the modern endeavors of Imre Kinszki, Lászlo Moholy-Nagy, Márton Munkácsi - Martin Munkacsi, József Pécsi, Gyula Halász - Brassaï, and Dénes Rónai, among others.

This unique and important group of five original documents include two small, modernist, typographic posters advertising the event, a registration form, a photograph of the exhibition interior and a small flyer or memorial ticket.