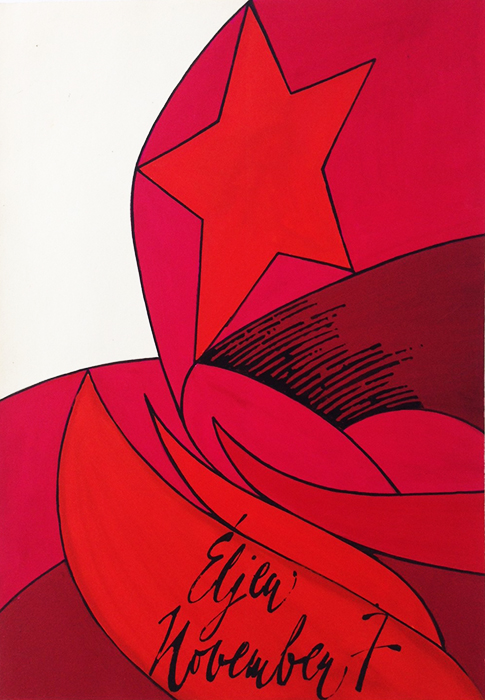 Impressive painted poster design from the 1960s, created by Antal Gunda, a fine poster designer , to remember the October Revolution of Russia in 1917.

Antal Gunda created numerous poster artworks for state celebrations and anniversaries. This work was created for the anniversary of the 1917 Russian revolution which was celebrated in every country of the Soviet Union during the Socialist period. The celebration was held on the 7th of November, but the original revolution was in October accourding to the calendar Russia used in the period. As the event was forced to be an international celebration in the Eastern bloc, we can find numerous posters in the subject. The artist has several pieces of them in our collection in several styles and portrayals.

This work is a modernist piece, connected to the visuality of the 1960s. The image contains only a few colours, white and some warm shades. The red star and the title are central elements of the composition and they appear in a similar form and position in another poster artwork by Gunda in our collection. The shapes and silhouettes in the composition evoke the visuality of the 1960s, and along with the lines used to create a shade for the star, the image recalls the visual world of such genres of the popular culture of the period as comics.

This poster artwork is a decoratively abstract piece from the 1960s. Although it was created for political propagandistic reasons, it reveals Gunda’s talent that the beautiful design wouldn’t make the viewer think of political content for the first sight.