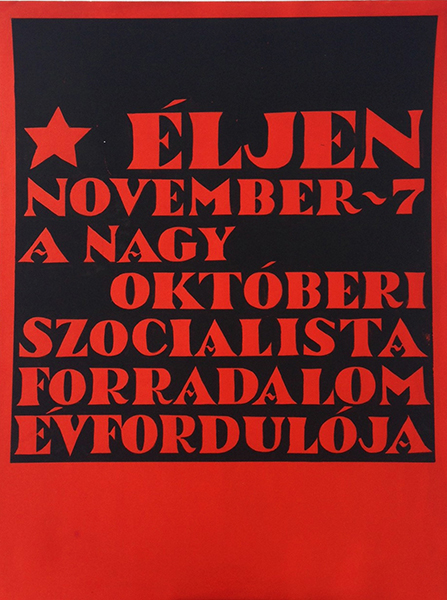 Typographic propaganda poster artwork from the 1960s. It was created by Antal Gunda, to remember the October Revolution of Russia in 1917 which was a national celebration in Hungary during the Socialist era.

Antal Gunda created numerous poster artworks for state celebrations and anniversaries. This work was created for the anniversary of the 1917 Russian revolution which was celebrated in every country of the Soviet Union during the Socialist era. The celebration was held on the 7th of November, but the original revolution was in October accourding to the calendar Russia used in the period. As the event was forced to be an international celebration in the Eastern bloc, we can find numerous posters in the subject. The artist has several pieces of them in our collection in several styles and portrayals.

This work is a quite traditional propaganda piece. Its script says: ’Live long the 7th of November, the anniversary of the great October Socialist Revolution’.  The artist used a base of the typical left-wing red colour and painted the composition with black in which the red letters are visible in negative.

This poster artwork is a typical propaganda piece from the years of Socialist era in Hungary, although it could function as a cultural poster artwork because of the event it was created for.