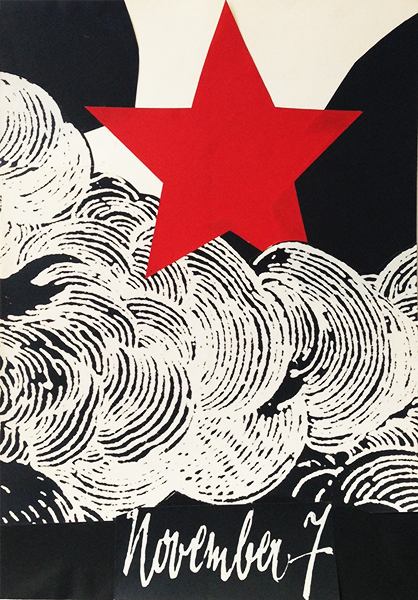 Impressive poster design from the 1960s, created by Antal Gunda, a fine poster designer , to remember the October Revolution of Russia in 1917.

Antal Gunda created numerous poster artworks for state celebrations and anniversaries. This work was created for the anniversary of the 1917 Russian revolution which was celebrated in every country of the Soviet Union during the Socialist period. The celebration was held on the 7th of November, but the original revolution was in October accourding to the calendar Russia used in the period. As the event was forced to be an international celebration in the Eastern bloc, we can find numerous posters in the subject. The artist has several pieces of them in our collection in several styles and portrayals.

This work is a modernist piece, connected to the visuality of the 1960s. The image contains only 3 colours: black, white and red. In front of a mostly black background the interesting, layered pattern of the foreground appears in white. The red star of Socialism can be seen above, as it jumps into the strong contrast of black and white.  It is interesting that the whole design was created with a sticking technique.

The image can call really interesting associations – it can picture how the Socialism comes and sweeps away the maelstrom and mess around the world, or the red star of Socialism may also be identificated with the Aurora cruiser, one of the warships of Russia which became the symbol of the October Revolution of 1918, and the interesting pattern can refer to the waves of the ocean. Many other ideas can fit, but either way, the design aims to refer  to the heroic event of the revolution and also to the heroic movement of Socialism which leads the rest of the world, as the political leadership wished.

This poster artwork is a decoratively abstract piece from the 1960s, which could be filled with political, symbolic content as well.