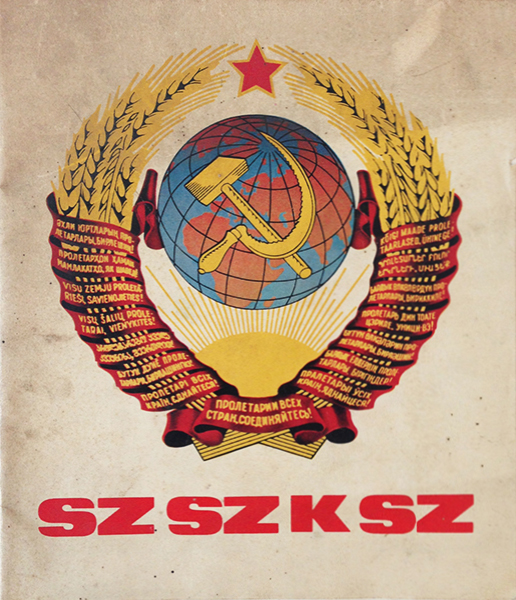 The USSR, that is the Union of Soviet Socialist Republics was a Marxist–Leninist state on the Eurasian continent that existed between 1922 and 1991. A union of multiple subnational Soviet republics, its government and economy were highly centralized. The Soviet Union was a single-party state, governed by the Communist Party with Moscow as its capital.

The Soviet Union had its roots in 1917 when the Bolsheviks, headed by Vladimir Lenin, led the October Revolution which overthrew the provisional government that had replaced the Tsar. They established the Russian Socialist Federative Soviet Republic (renamed Russian Soviet Federative Socialist Republic in 1936), beginning a civil war between pro-revolution Reds and counter-revolution Whites. The Red Army entered several territories of the former Russian Empire and helped local Communists take power through Soviets, which nominally acted on behalf of workers and peasants. In 1922, the Communists were victorious, forming the Soviet Union with the unification of the Russian, Transcaucasian, Ukrainian, and Belorussian republics. Following Lenin's death in 1924, Joseph Stalin came to power in the mid-1920s. Stalin suppressed political opposition to him, committed the state ideology to Marxism–Leninism (which he created) and initiated a centrally planned economy. As a result, the country underwent a period of rapid industrialization and collectivization which laid the foundation for its victoryin World War II and post-war dominance. Following Stalin's death in 1953, a period of political and economic liberalization, known as "de-Stalinization" and "Khrushchev's Thaw", occurred under the leadership of Nikita Khrushchev. The country grew rapidly, as millions of peasants were moved into industrialized cities. The Space Race heated up, and the USSR took an early lead with the first ever satellite and world's first human spaceflight. In the mid-1980s, the last Soviet leader, Mikhail Gorbachev, sought to further reform and liberalize the economy. The goal was to preserve the Communist Party while reversing economic stagnation. The Cold War ended during his tenure, and in 1989 Soviet satellite countries in Eastern Europe overthrew their respective communist regimes. This led to the rise of strong nationalist and separatist movements inside the USSR as well. Central authorities initiated a referendum—boycotted by the Baltic republics, Armenia, Georgia, and Moldova—which resulted in the majority of participating citizens voting in favor of preserving the Union as a renewed federation. In August 1991, a coup d'état was attempted by Communist Party hardliners. It failed, with Russian President Boris Yeltsin playing a high-profile role in facing down the coup, resulting in the banning of the Communist Party. On 25 December 1991, Gorbachev resigned and the remaining twelve constituent republics emerged from the dissolution of the Soviet Union as independentpost-Soviet states. (source: wikipedia.org)

This brochure is from the early 1970s, when the USSR went through a temporary upswing. The preface says the following:

"Dear Friends, this brochure briefly introduces the Soviet Union, the country which was the first to step on the road of Socialism, which was the first to put an end to the exploitation of human by human, and was the first to give freedom rights to workers. Furthermore, our brochure explains how the 15 nations of the Soviet Union merged into the socialist republic's friendly association, the achievments on different fields of the people's economy, the discoveries of Soviet scientists and the possibilities of the Soviet Union to improve its economic, scientific and cultural relationship with other countries based on the equal rights and mutual advantages."

The brochure contains photo illustrations and text about the topics mentioned in the preface. The style is the usual demagogue socialist propaganda both in text and in visual sense. The photos show happy workers, big industrialised cities, factories, reliable and strong leaders, blooming agriculture, eager to learn young people, etc.

The cover page has the communist coat of arms on it with the globe and the hammer and sickle in the middle. The text on it is written in cyrillic letters.