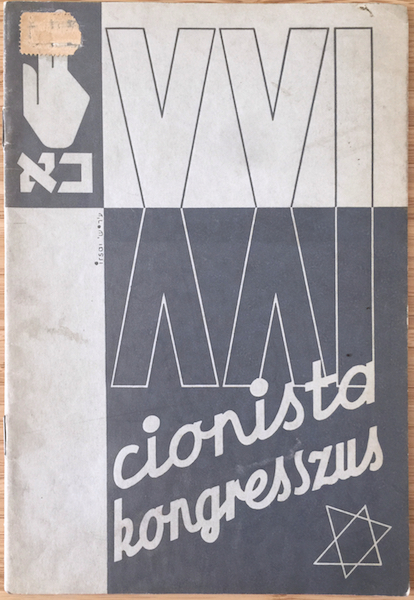 Fine, remnants of a stamp in the upper left corner, and light wear and staining on the cover.

The Modernist cover was designed by Istvan Irsai.

There are two main focuses of the publication.

The first one is the construction of the Jewish state and status of the Palestinian Jewish community, the jisuv, the purchase of as much land as possible and continuous construction work and the White Paper of 1939.
The paper called for the establishment of a Jewish national home in an independent Palestinian state within 10 years, rejecting the idea of partitioning Palestine. It also limited Jewish immigration to 75,000 for 5 years, and ruled that further immigration was to be determined by the Arab majority (section II). Restrictions were put on the rights of Jews to buy land from Arabs (section III).

The second is World War 2 that broke out that year, and the effect it would have on the plan of the zionists.

Thus it is a document that captures a focal point of historical significance for numerous reasons.

Istvan Irsai or Pesach Ir-Shay was an important poster designer and architect in Hungary and in Israel. Irsai’s original style makes him one of the greatest masters of modernist-constructivist poster art.

He was born to a non-religious Jewish family, his father turned his name to Irsai after the Hungarian town Albertirsa. István Irsai finished highshool at a conservatory as a violin player. Between 1914 and 1916 he was serving as officier in the First World War, he got seriously injured, which blocked his career as violinist. In 1916 Irsai returned home as veteran Liutenant, and he began to study architecture at the Technical University of Budapest, besides he finished the Music Academy as music teacher.

Beginning his career as an architect and furniture designer, he also worked in the field of graphic design. In the early 1920's he was working at the Globus Printing House, where he learned everything about printing techniques, inclueded large scale lithography (which was very usefull for his later work).

In 1925 Irsai emigrated to Palestine, where he became involved with graphic works. Hailed as a leading graphic artist in Israel, he developed the first modern Hebrew font, the “Haim.” He was seriously interested at typography and he also wrote a book about the new font. Besides this he made signets, emblems and other graphic works for instutions in Erec-Israel. He was fond of theatre art too, with great actors and directors he joined the foundation of the first Jewish theatres in Palestine, one of them was the famous HaKumkum. Irsai worked as designer of the thearte's mobile stages. He also designed Bauhaus styled houses in Tel-Aviv, but sadly non of them exists today.

In 1930 Irsai returned to Hungary and established an impressive career as poster and graphic artist. He immediately had a huge impact, designing numerous outstanding posters in the early 1930’s. After most artists have abandoned the modernist style by the second half of the decade, Irsai continued to work in this style and he was highly parised by his contemporaries, including Bortnyik. He designed several clear constructive poster designs for commercial products.

In 1944, Irsai was deported by the Kasztner train to Bergen-Belsen. But according to a deal worked out by Rezső Kasztner, he and prominent Jewish families and representatives of the Jewish intelligentsia were rescued from the concentration camp. They were all successfully sent to Switzerland, and from there Irsai emigrated to Israel in 1945.