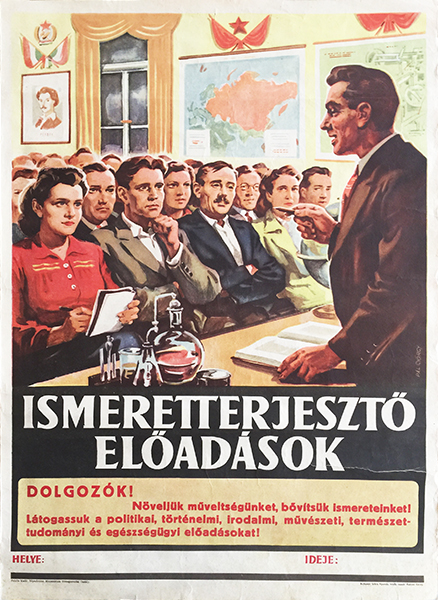 Socialist Realist propaganda poster to popularize lectures which were namely scientific presentations but in practice these lectures altered history and were used as means to forcibly spread the Communist ideology among people. The text says: 'Scientific lectures. Workers! Let's enhance our intelligence and broaden our knowledge! Attend the lectures about politics, history, literature, art, natural science and hygiene.' It was a bianco poster, time and place had to be filled in.

The composition is very typical of the Socialist Realist style and carries numerous motives of the era - red star, hammer and sickle... The lecturer is standing on the lectern and he is very happy to convey his knowledge to the audience. The people listening to him are very disciplined and eager to learn everything told by the lecturer. The decoration of the room is also noteworthy. On the wall there is a picture of Sándor Petőfi, the author of the Hungarian National Song, one of the greatest Hungarian poets of all time. It is very interesting how the Socialists incorporated Petőfi in their propaganda who was a key figure of the Hungarian revolution of 1848 which was against the Austrian empire for the Hungarian independence. Petőfi died in the revolution and today he is considered to be the national poet of Hungary. However, the socialists did not like the idea of patriotism, but they could not erase Petőfi from people's minds, thus they put him in a context where they could label him as one of the most important precursors of Socialism. His poems sodden with revolutionary feelings were emphasized but the ones proving his love and devotion for his homeland were rather neglected. The international connections of the revolution were stressed as there were many Polish or Italian people in the army in 1848. According to the Socialist interpretation, in that time this meant that people were fighting for the development of humanity and not for the autonomy. This forced propaganda was everywhere but all people knew that there was much more in the story. The second picture on the wall is the map of the Soviet Union. This poster can be regarded as a genuine historic document of the era.