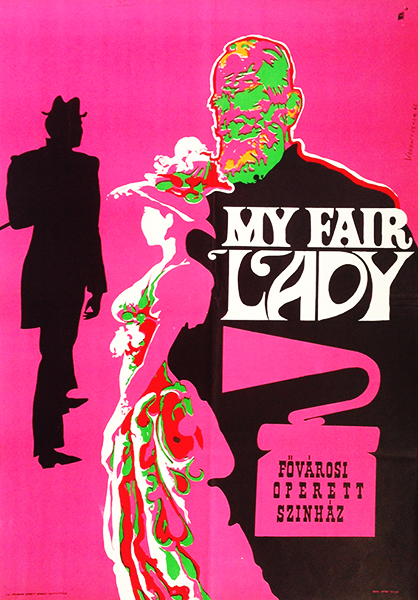 My Fair Lady is a musical based on George Bernard Shaw's Pygmalion, with book and lyrics by Alan Jay Lerner and music by Frederick Loewe. The story concerns Eliza Doolittle, a Cockneyflower girl who takes speech lessons from professor Henry Higgins, a phoneticist, so that she may pass as a lady. The original Broadway, London and film versions all starred Rex Harrison. The musical's 1956 Broadway production was a momentous hit, setting a record for the longest run of any major musical theatre production in history. It was followed by a hit London production, a popular film version, and numerous revivals. It has been called "the perfect musical". (source: wikipedia.org). The vivid pink of the poster gives it a strong character what is further emphasized by the black silhouettes. The delicate woman figure almost becomes one with the background but the playful pattern of her dress rather highlights her. The whole composition resemble the style of the pop art period.