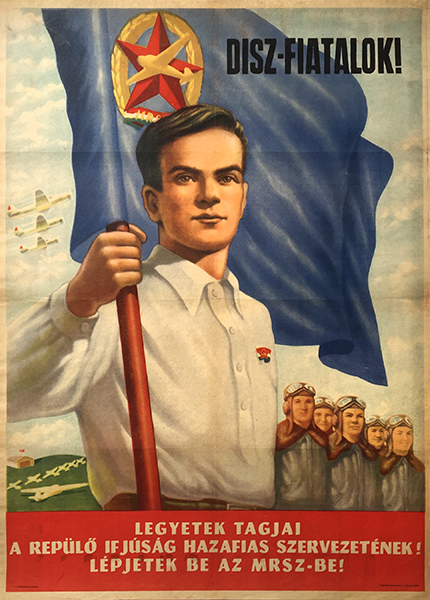 Socialism in Hungary lasted four decades during what the communist model developed in the USSR influenced all aspects of the life of Hungarians. Poster design wasn’t an exception, however the socialist realist style was only obligatory between 1950 and 1955. In these years both the manner and the subjects were determined and controlled centrally. The compositions were required to be painting like, naturalistic, realistic and easily interpretable displaying smiling and happy people along with communist symbols. Numerous propaganda posters were made to popularize holidays, new social institutions or actions of the government. Not only posters with social subjects tried to determine people’s everyday activities, the government intruded to the private life of people as well. Cultural activities and sports were regarded as of political importance. Revolutionary associations were established, such as the MHSZ, Hungarian War and Sports Association, thus leisure activities could be centrally controlled. The ulterior motif of the courses organized by these institutions was a preparation for a third world war, a military training.

This poster intended to motivate young people to join the ‘patriotic youngster’s aeronautical  association’- according to the inscription at the bottom. On the top, the text ‘DISZ - fiatalok!’ addresses the members of DISZ, the Union of Working Youth (Dolgozó Ifjúság Szövetsége). The communist party after finishing with the rearrangement of society (new constitution, the first five-year plan, introduction of new national holidays, etc.) started to set up its juvenile organization. Among their first actions was the establishment of DISZ in 1950. The organization was based on Soviet model. Young workers, peasants and intellectuals between the age of 14 and 26 could join and the uttered aim was the unification of youngsters. Soon oppositional tendencies emerged within the organization and it broke up in 1956, during the revolution.

MRSZ the Hungarian Aeronautical Association was founded in 1910 and is the number one institution of Hungarian sport aviation. After the Second World War a lot of pilots were released from military service and many aircraft became available, therefore the circumstances were ideal to offer opportunity for people to learn the profession.

Communist symbols and emblems were never missing from the socialist realist posters. On this piece there are two ensigns. The more striking to the eye is the one on the blue flag, the communist emblem of MRSZ: the red star is surrounded by wreath of wheat, and there is a plane on it. At the bottom, there is the Hungarian tricolor with the abbreviation: MRSZ. The other ensign is on the white shirt of the boy who is holding the flag, the badge of DISZ: the Hungarian tricolor, a red star on it and the abbreviation: DISZ. The composition bears all the socialist realist characteristics. A painting like, heroic, straightforward and monumental character is in the foreground, staring into the future with a gentle, yet strong and determinate gaze. Behind him the less detailed figures of the pilots-to-be appear, wearing the proper aviator uniforms. On his other side identical planes are waiting for the pilots to drive them, and three other ones are already flying in the air, in perfect synchronicity. The obligatory revolutionary and heroic nature is present: the students are lining up behind their strong and trustworthy leader who prevents and supports them hence everything can take place in an organized way, in peace and of course, under the aegis of Communism.