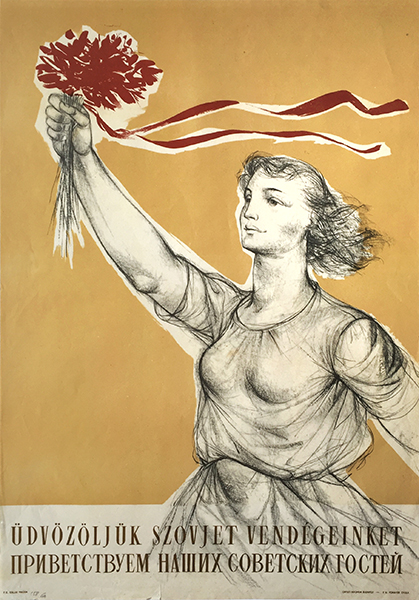 We welcome our Soviet guests

The poster was made in honour of the Soviets who invaded and occupied Hungary in 1945 hence liberating the country from the previous Nazi occupation. However, the majority of Hungarians were relieved when World War II ended, the population was not utterly enthusiastic about the Red Army staying in the country. Despite several failures on the elections that followed the war, the Communist party took over in 1949 with an election fraud. From that year, up until 1956 the Soviet model was forced on every aspect of life, including the style and themes of posters.

The posters in the era praised the Soviets and expressed gratitude. This piece is a reference to the iconic statue by Vera Mukhina, one of the most important Soviet sculptors. Her statue, the  'Worker and Kolkhoz Woman' was strongly associated the Soviet Union and the Communist ideology. On this poster a woman holds aloft a bouquet with a red ribbon, while Mukhina's woman figure holds a sickle (while the man holds the hammer), the symbol of communism. Although Reich's the composition is not a copy of the monument, it is a clear homage to it. The woman's posture and the style, as well as the historical context revelas the connection between the two artworks.