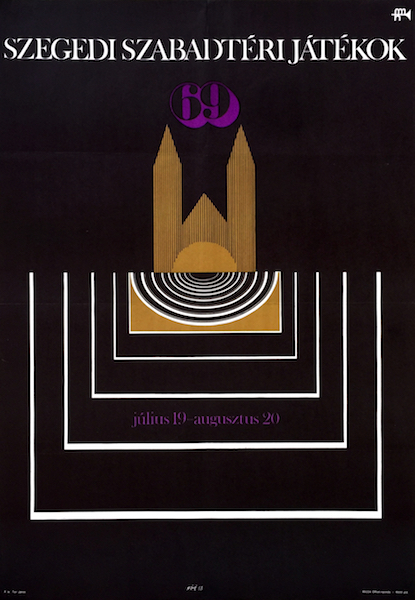 Open-Air Festival of Szeged is a 1969 vintage Hungarian travel poster designed by Andras Mate in 1968.

One of the first summer theaters to be launched in Hungary was the Szeged Open-Air Festival that has been organized for more than seventy years now. The first performance - the Hungarian Passio - was presented in 1931. Since then, the performances of the open-air theatre have been the main success and attraction of each summer in Szeged. The superb acoustics of the church square surrounded by arcade is an excellent location for staging open air theatrical performances.   (source: www.szegediszabadteri.hu)

In 1969, the poster of Andras Mate advertised the famous event. He used up the symbol of the festival and of Szeged: the two spires of the Votive Church. He combined this emblem with a geometric illustration representing the theatre stage. The whole appears as a clear and elegant composition.

Ever since its first performance in 1931, the Open-Air Festival of Szeged has constituted the region’s chief cultural event of the summer. Hungary’s largest theatrical performance venue and most significant outdoor theatre auditorium offers seating for 4,000 viewers, and each year in July and August 70,000 people attend the musical, operetta, opera, dance and prose drama productions held in the enchanting atmosphere of Dóm (Cathedral) Square, a space often likened to Venice’s St Mark’s Square. (source: effe.hu)