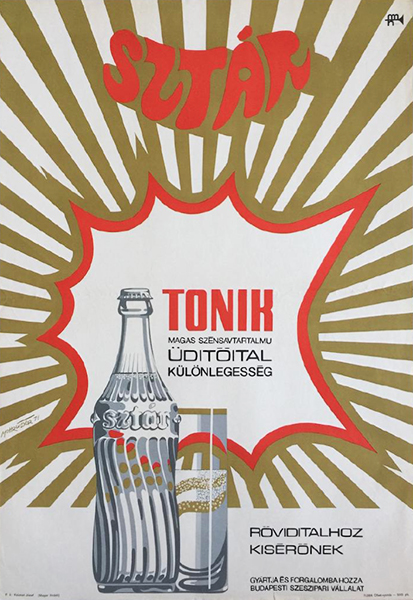 Star tonic water soft drink is a 1971 vintage Hungarian Pop Art advertising poster designed by Vilmos Mohrluder. According to the slogan the product is excellent to accompany spirits (e.g. gin).

Tonic water (or Indian tonic water) is a carbonated soft drink in which quinine is dissolved. Originally used as a prophylactic against malaria, tonic water usually now has a significantly lower quinine content and is consumed for its distinctive bitter flavor, though it is nowadays also often sweetened. It is often used in mixed drinks, particularly in gin and tonic. Quinine powder is so bitter that British officials stationed in early 19th century India and other tropical posts mixed the powder with soda and sugar, and tonic water was created. The first commercial tonic water was produced in 1858. The mixed drink gin and tonic also originated in British colonial India, when the British mixed their medicinal quinine tonic with gin. Since 2010, at least four tonic syrups have been available in the US. Consumers add carbonated water to the syrup to make tonic water, allowing drinkers to adjust the flavor intensity. (source: wikipedia.org)