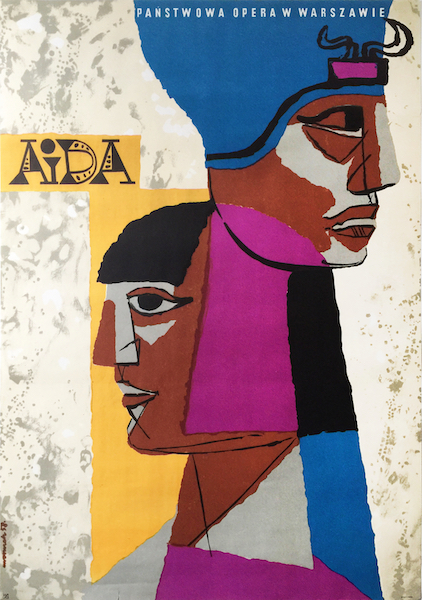 Aida is an original vintage theatre poster by Jozef Mroszczak from the 1960s.

Mroszczak was not only a leading Polish poster artist, but was also one of the fathers of the world fame of Polish posters, recognized as a top representative of the Polish school of posters alongside Tadeusz Trepkowski, Henryk Tomaszewski and Jan Lenica. While mainly a visual artist, he was also an organizer of artistic life. His promotion of the poster art was instrumental in it becoming known and valued by large numbers of the public. Mroszczak successfully and innovatively combined the key ingredients of the poster: maximum information conveyed with minimum means and a persuasive pictorial aspect. His posters are more painting-like than those of most Polish artists; he covered large areas with unrestricted spots of colour to achieve a decorative effect. He ensured a balance between the communicative and visual aspects of his posters, the communicative side never becoming a mere pretext for the visual side, the visual side never leading an existence of its own. He was a versatile artist experimenting with different styles.

Folksiness, the most pronounced characteristics of Mroszczak's posters, was not an esthetic convention adopted with premeditation, but something that suited his personality and temper. His posters, filled with vivid spots of green and red, blue and yellow, bring to mind folk glass paintings and naive art. Some of Mroszczak's film and theatre posters resemble children's torn-paper collages. (source: www.culture.pl)