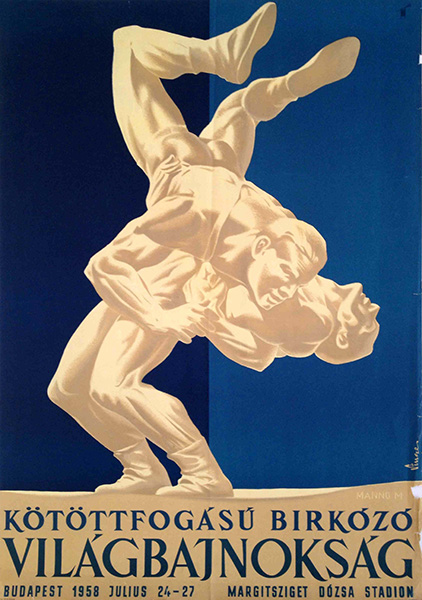 Monumental sport poster from the late 1950s. It was created for the Greco-Roman Wrestling World Cup of 1958. The championship was held in Budapest, from the 24th until the 27th of July, on the Margaret Island.

The poster was designed by Dénes Vincze, but he used the former design of another great artist, Manno Miltiades, whose name is also mentioned.

Dénes Vincze must have been a real sports fan as most of his graphic works are related to sport. He created great sport posters in the 1950's and 1960's, many of his works advertised different championships. Manno Miltiades was a great sportsman, a graphic artist, painter and a sculptor, too. He is primarily known for his sport and propaganda posters.

The poster is a decorative piece. The wrestlers appear like monumental marble sculptures, frozen in a dynamic movement.