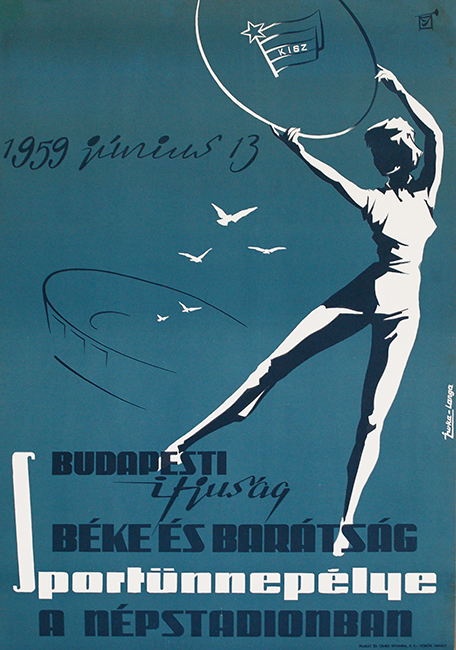 Sports Festival of the Youth of Budapest

Interesting poster for a propagandistic sport event in 1959. The event took place in the large new stadium, the "Népstadion" ("People's Stadium) which was built in 1953.

The propagandistic character can be visible in the poster. The event was called "Peace and Friendship Sport Ceremony of the Youth of Budapest". The logo of the "KISZ" ("Kommunista Ifjúsági Szövetség", or Communist Youth Alliance which was the youth organisation of the ruling communist party in Hungary) appears above. The "sport ceremony" is represented as something uplifted and majestic, naturally under the control of the political powers.

The portrayal of the poster is quite modernist. The decade had a strict socialist realist period in the beginning which lasted until 1956 in Hungarian poster design, and it is interesting that definitely different designs can be found from only some years later. The political propagandistic character was still present, although in a distinct way. However, the former obligatory realist manner disappeared, the modern style could emerge again, as this example shows. Simple shapes, concentrated composition, strong contrast and a way more stylized portrayal - this design is a spectacular piece.