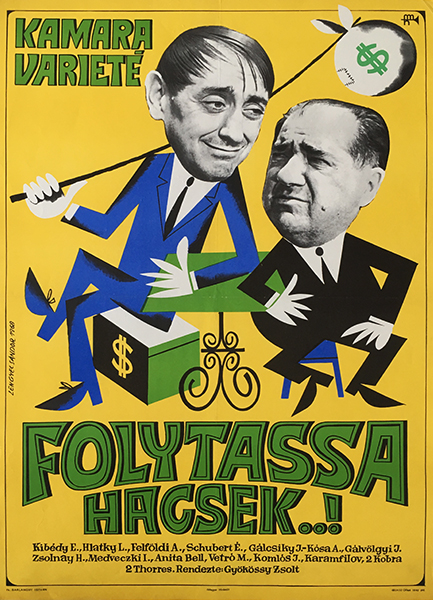 Poster of a Hungarian musical comedy play, Continue Hacsek!. The play was first performed in the Chamber Vaudeville in 1968.09.13. It was written by István Fejér. The main role was played by Ervin Kibédi a very famous comedian of the time. Eric Vogl was the costume and set designer who was a poster designer as well. His popsters were mostly made for theater plays. Many stars of the time played roles in the performance, for instance: Ilona Medveczky, János Gálvölgyi, Juci Komlós, and many others.

The poster was designed by Sándor Lengyel who was a well-known poster artist of the time. His works were mostly cheerful pieces made with paper cut-ot technique. He worked in the typical cartoon-like style of the 1960s, yet he had his own unique voice. On this piece he incorporated black and white pictures of  the characters heads and their bodies and the environment is  drawn.