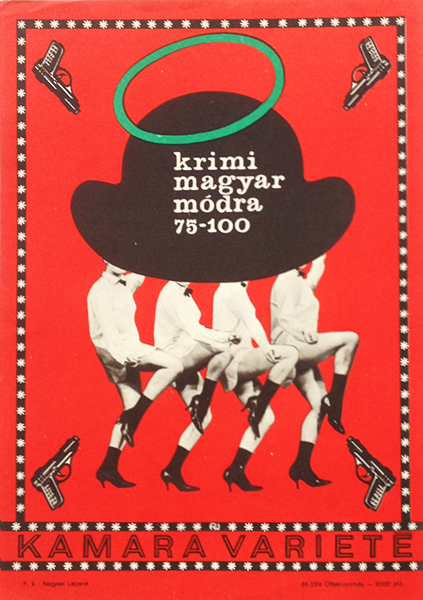 The play promoted by this tram poster was first performed in 1966. Many famous actors of the time were playing in it. For instance: Ervin Kibédy, Ildikó Pécsi, Karola Csűrös, Lenke Lórán. The costume designer was Eric Vogel who was working for theatres and was not only designing costumes and sets but posters as well. Here are some of his works: Budapest Vaudeville, Chaplin, Oh, Mama. The description of the play was: musical creepyness in two parts.

The design is similar to the classic vaudeville posters, that is the legs of the dancing ladies are apparent in a similar, dancing position. However here, the pattern is not that regular and they arev wearing male's shirt, a bow-tie, socks, heeled shoes and no pants. Their faces are covered with a hat which has a halo around it. From the four corners of the page, four guns are pointing at the dancers. The design sums up the performance it is promoting: music, dancing, crime, mystery and comedy.