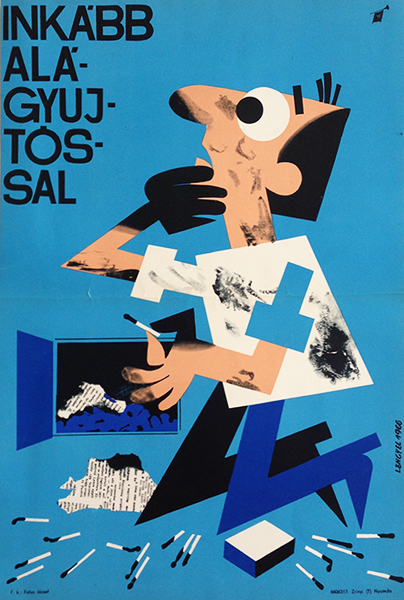 Use kindling instead of matches

'Use kindling instead of matches' is an original Hungarian vintage safety propaganda poster by Sandor Lengyel from 1966.

The poster suggests using kindling instead of matches for safety reasons. The design represents Sandor Lengyel's typical style: despite the less exciting subject the cartoon-like figure and the geometrical shapes create a humorous atmosphere.

The main character on the poster is built up of clear geometric shapes but the artist still managed to express the feeling of despair on him. The message is very easy to understand: he had tried to set fire with dozens of matches and newspaper sheets and he still couldn't manage. His skin and white shirt are covered with smut and he is helpless.

Lengyel used mainly clear blue colors on the poster beside some white and black what is quite unusual on safety propaganda posters, however, he accomplished to create a powerful and eye-catching composition.