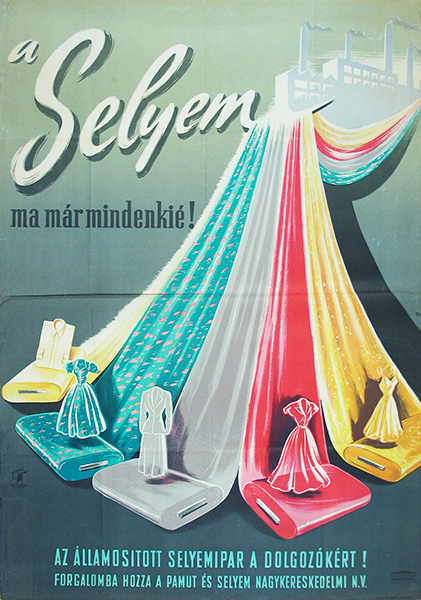 Silk is now for everyone! The nationalized silk industry is for the workers!

Wonderful poster for the Hungarian Silk and Cotton Factory.

Silk production was introduced in Hungary in 1680 but it only became very popular towards the end of the 19th century. The first local silk producing company was established in 1901. Before the First World War Hungarian silk manufacturing was the 3rd in Europe and due to the demand generated by the war, production was blooming. After losing the war and 2/3rd of the country's territory, the Hungarian workers were fired from the company and in 1931 it was closed. In 1935 the factory was bought by the wealthy Bujatti brothers and the production has started again, the company was growing giving work to many people. During World War II, silk for parachutes was produced and towards the end of the war one part of the factory building was turned into a military hospital. When the German army left Hungary after being defeated by the Soviets, they took all the remaining fabric with them while the money at the factory was stolen by the Soviets, according to the records written by the administrator of the company. After the war, thanks to the work of the numerous volunteers, the company managed to survive and they were exporting to the Swiss market.The company was nationalized in 1948 as most companies in the Socialism, and from 1949 it was operated by the Ministry of Light Industry. This Ministry was established in 1949, the year when the Socialist regime completely took over and the constitution was changed. Numerous new ministries were born in this year. From the middle of the 20th century, silk production and the breeding of silkworm went through an upswing, however it didn't last long, as in the 1960s cheaper substitute materials have appeared and quickly overtook the market.

This poster is a document from the short period when silk production in Hungary was state owned and was still blooming and is a perfect example of socialism gathering ground. The message is that silk is now available for everyone and that the silk industry is nationalized in order to please the workers. Prior to socialism silk was a high end expensive product worn by upper class people. It was a perfect tool in the hands of the socialist leaders by which they could show the mass that they make these products affordable for everyone and at the same time they make new workplaces for workers. It basically sums up the message of the ideology they wanted to spread. The design of the piece was not made according to the obligatory soocialist-realist style between 1949 and 1956, however, it has some elements typical of the era. On the very top, the building of the factory is visible and its chimneys are smoking, showing that the workers are busy working. Silk is falling down from the factory in different colours as the result of the sedulous production. On each colour of silk there is a dress made from it, four different style women's dress and one shirt, to showcase that silk can be used for a large variety of outfits.

The author of the poster is János Macskássy, who was a graphic designer and painter working from the 1930s. His posters were mostly light-herated pieces, just as this one, thanks to its fine colours and the harmony created by the beautifully depicted fall of the fabric. This poster is a spectacular document of a changing economy, political system and art scene of Hungary.