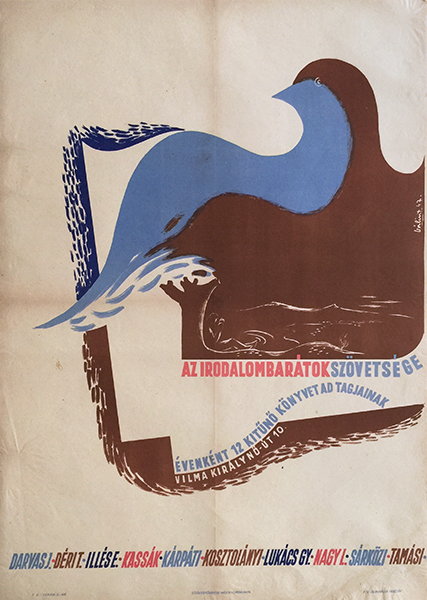 The Friend of Literature Association was a short-lived cultural club. There is no clear information regarding the year of its establishment, but according to the earliest written document, the basic principles were firts accepted in 1948, the 2nd of January. This poster was made in 1947, hence we suppose that the association was already existing in that year, even if they were lacking the necessary formalities to be offical. It had around 300 members, and was lead by famous literary figures. The chairman was Dr. István Ries, politician and lawyer who was about the be convicted in a show trial in 1950 but he was beaten to death in prison before the trial. The association also terminted after these events. Gyula Illyés, Dezső Keresztury, Aurél Kárpáti and Oszkár Gellért were also members.

There is not much information available about the association, but the poster reveals that members were given 12 books a year. The poster lists some of the great authors, who offered their works for this purpose: József Darvas, Endre Illés, Lajos Kassák, Aurél Kárpáti, Dezső Kosztolányi, György lukács, László Nagy, György Sárközi and Áron Tamási.

The poster was created in a unique and short period that was equally important in Hungarian history, culture  and art. In this era, Hungary was already occupied by the Red Army, however, there were some attempts to establish a democratic form of state. As a result, numerous political themed posters were created, but event, cultural and commercial ones were also published. Whatever the theme was, posters of high quality were designed in this era. At that time the so-called European School was prominent in the field of art in Hungary what contributed to the birth of these artistic pieces. This progressive school was founded in 1945 by Pál Gegessi Kiss, Lajos Kassák, Árpád Mezei és Imre Pán with the aim of preserving the heritage of surrealism and modernism. The name is a reference to their intention to cooperation with the European art world. The school was terminated in 1948, similarly to all civil art schools. The author of the poster, Endre Bálint was also a member.

This poster evokes the traditions of the elegant Art Deco style, that was popular in Hungary in the 1920s and 1930s.