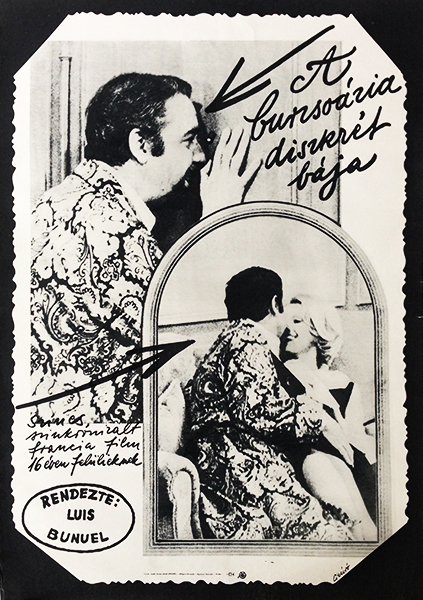 Discreet Charm of the Bourgeoisie, The

Fine, creases and a few small tears along the border.

The Discreet Charm of the Bourgeoisie (French: Le charme discret de la bourgeoisie) is a 1972 surrealist film directed by Luis Buñuel, and written by Jean-Claude Carrière in collaboration with the director. The film was made in France and is mainly in French, with some dialogue in Spanish. The narrative concerns a group of upper-middle-class people attempting — despite continual interruptions — to dine together. The film received the Academy Award for Best Foreign Language Film and a nomination for Best Original Screenplay. The film consists of several thematically linked scenes: five gatherings of a group of bourgeois friends, and the four dreams of different characters. The beginning of the film focuses on the gatherings, while the latter part focuses on the dreams, but both types of scenes are intertwined. There are also scenes involving other characters, such as two involving a Latin American female terrorist from the fictitious Republic of Miranda. The film's world is not logical: the bizarre events are accepted by the characters, even if they are impossible or contradictory. (source: www.wikipedia.org)