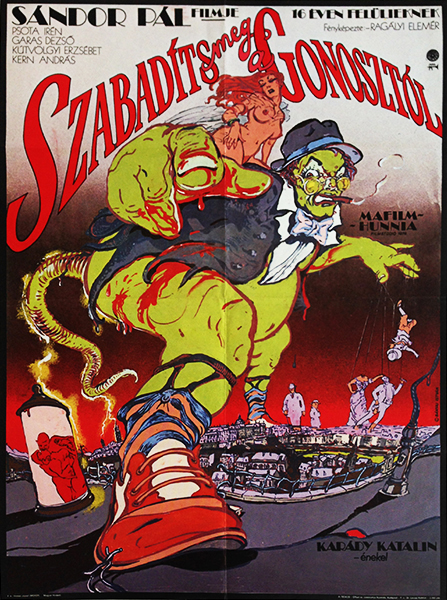 Deliver Us from Evil

The film takes place in 1944 in the last months of the Second World War. The plot centers around a coat which is stolen by the son of the cloakroom attendant of a dance school.He steals the coat during an air raid alarm when no one pays attention. He sells it so he can pay a prostitute for her services. His mother wants to get the coat back and give it back to its owner to get his sons reputation straight. The chase for the coat begins with Mama, the cloakroom attendant, her daugter, son in law and her son. During their chase they go through the horror of war and they commit much worse crimes than stealing a coat. The movie is a moral story about how the war damages people's moral standards.

The poster depicts a green puppetteer playing with the characters like marionettes in his hand. The figure is the symbol of war, his face is very ugly and mean. Below him there is the city of Budapest. The author of the poster, Istvan Banyai always creates unique compositions and prefers to incorporate exquisite conceptions into his posters, drawing elements from the traditions of visual art. On his posters, we sense the decorative attitude of secessionism (Art Noveau) mixed with pop art, the visual world of comics, and popular or “trash” culture. His movie posters often employ horror effects, monumental visions, and absurd details. These posters preserve the style of comics and animation, though with high artistic qualities. Banyai describes his art as "an organic combination of turn-of-the-century Viennese retro, interjected with American pop, some European absurdity added for flavor, served on a cartoon-style color palette... no social realism added."