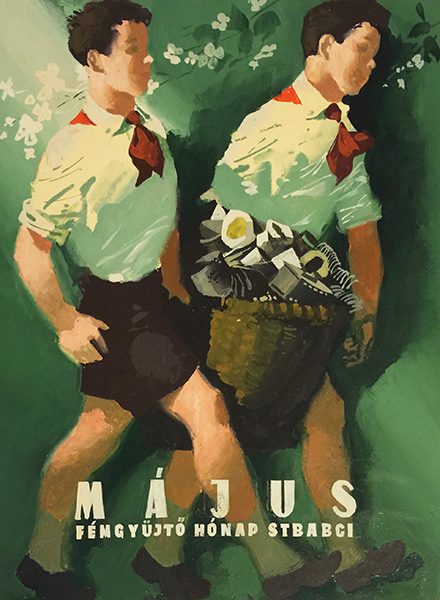 Mátyás Sinka was an important poster artist who started his career in the 1950s. First he created socialist realist designs as it was expected in the period. Later in the 1960s and 1970s he designed a lot of interesting and humorous posters, but also designed vinyl album covers. Besides graphical activity, Sinka also painted landscapes in a traditional manner. This design was also influenced by this tendency.

The maquette is a socialist realist painted artwork for a later-to-be event poster of the scrap metal collecting month. It was in May, according to the inscription. Although posters have different purposes than paintings, this work is really painting-like, not without reason. In Socialist Realism, there was not such a difference between painting art and poster art as the political leadership used art as a tool to propagate Stalinist ideology irrespectively from the genre. The message was the point which had to be expressed clearly for ordinary people. That was the reason why realist manner was a must to employ. The content was an extensive propaganda with typical figures of smiling peasants, strong working-class man, and cheerful children in uniform, usually appearing in stereotypical environments like wheat fields, factories, or local natural spots. All these things were aimed to reflect that the economy is strong, people are happy and everything is working fine under the control of the political leadership. Socialist realist designs also had to encourage people to work more and better, to satisfy the requirement of submitting goods for the cooperatives, to work according to safety instructions, to bond peace loans, to harvest the first grain to the homeland, etc. – all in all, to be “good socialist citizens”. This kind of education started from a young age, which is perfectly shown by this artwork. This time the duty was collecting scrap metal and the target group of the event were children.

Two male children are captured walking and carrying a huge basket full of scrap metal together in a pure natural environment. The figures are wearing black shorts, white shirt and a red neckpiece, the easily recognizable uniform of the pioneer movement. It was an organization for children operated by the communist party. It was quite similar to the Scout movement, with the exception of being dependent on government control and political parties. That was why, for example, promotion of sports and outdoor skills was a shared principle, but the pioneer movement also included teaching of communist principles.

Although the faces of the children are not very detailed, they seem to be happy and determined. (There are several possible reasons why the faces are not detailed: maybe it was the first version of the design and the artist left the faces in this condition for possible later modification, or it was the final design, but the artist intended to make children enable to identify with the figures.)They are strong and suitable for the duty which they accomplish perfectly, as they collected a huge pile of scrap metal.