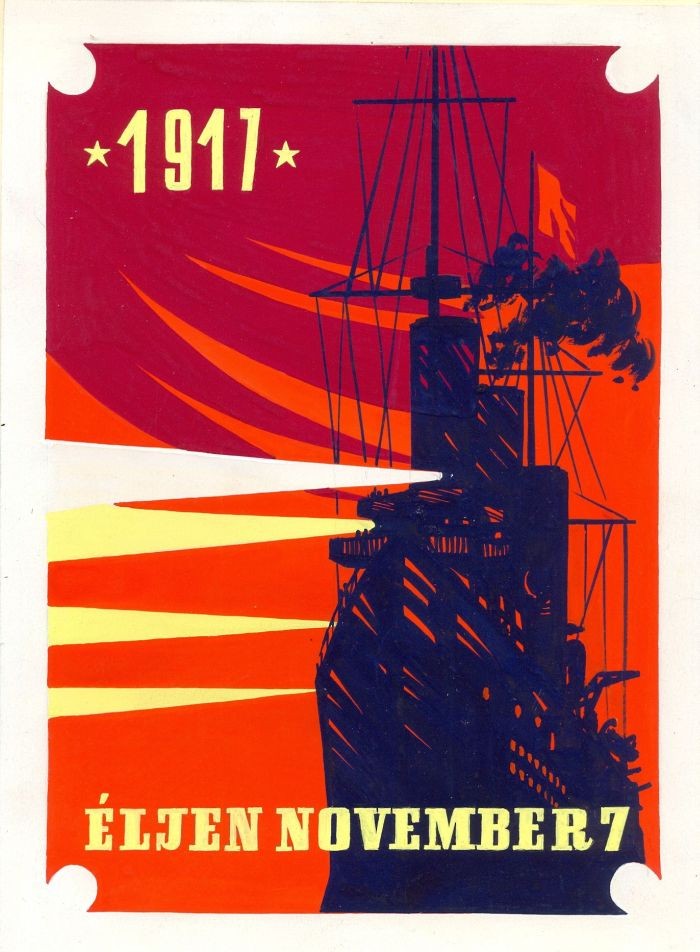 Very decorative and modern painted poster artwork from the end of the 1950s. It was created by Bertalan Altmann, for remembering the October Revolution of Russia in 1917.

The posters of annual celebrations could sometimes be exceptions as we can find some examples of them with a more modern design.  This poster artwork is a decoratively modern piece with the use of a few, strident colours and expressive portrayal. The central element of the composition is the Aurora cruiser which was one of the three Pallada-class warships of Russia and it also became one of the symbols of the October Revolution of Russia from 1917 as one of the first incidents of it took place on it.

„During World War I Aurora operated in the Baltic Sea performing patrols and shore bombardment tasks. In 1915, her armament was changed to fourteen 152 mm (6 in) guns. At the end of 1916, she was moved to Petrograd (the renamed St. Petersburg) for a major repair. The city was brimming with revolutionary ferment and part of her crew joined the 1917 February Revolution. A revolutionary committee was created on the ship, with Aleksandr Belyshev elected as captain. Most of the crew joined the Bolsheviks, who were preparing for a Communist revolution.

At 9.45 p.m on 25 October 1917 (O.S.) a blank shot from her forecastle gun signaled the start of the assault on the Winter Palace, which was to be the beginning of the October Revolution. In summer 1918, she was relocated to Kronstadt and placed into reserve.”
(source: en.wikipedia.org)

The dark blue image of the warship appears in front of the colourful background in an expressively painted composition. Although this poster artwork was created for propaganda reasons in the end of the 1950s, it represented a fresher style in the poster design of the period.