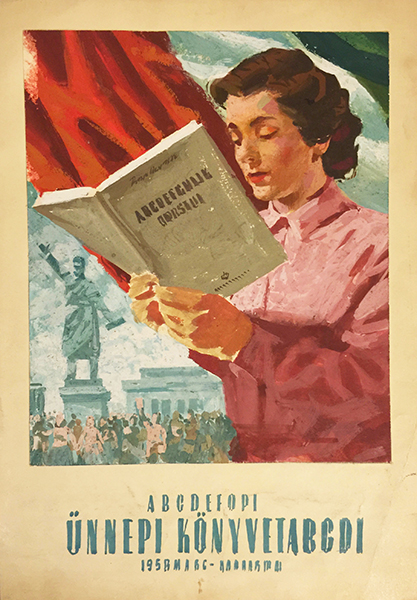 Festive book weeks are nationally organised cultural events, which are being held since 1929 in Hungary. The first event took place in Budapest, but later numerous other cities started to participate. The aim of the event is to gain bigger popularity for reading books, and familiarize the earlier and contemporary books with audience.

This piece was created for the festive book week between 1952 and 1956. The painted poster artwork was designed by Matyas Sinka. Sinka is a fine Hungarian graphic artist who was mostly active between the 1950s and the 1970s. He created many humorous and interesting posters for official propaganda and for campaigns for prevention from accidents, promoting healthcare, traffic rules and anti-alcoholism. But he also designed numerous commercial and cultural posters. He refined his often cartoon-like, expressive style mostly during the 1960s. This work, however, had been designed in the beginning of the 1950s, in the era of intense political control over art.

The artwork is highly connected to the period by its graphical character, as it is a good representative of the socialist realist design of the age. Socialist Realism was the key tool of the Hungarian political dictatorship in their extensive propaganda activity in the first part of the 1950s, just as in other Eastern-European countries in the Soviet Union. As other artists, poster designers also had to meet the requirements of a socialist content and a realist manner. Thus, mostly a heroic, figurative portrayal was employed to make the propagandistic messages clear and easy to understand.

This work is a good example of the tendency that a lot of poster designs looked like a cut-out of a painting as the differences of the two genres was artificially blurred. Gunda applied slow brushwork and a detailed, realist portrayal, and he represented the event in a propagandistic way with national and socialist symbols. This way the content of the poster was also accepted by the political party.

A woman can be seen in the foreground as she is obsessively reading a book. She is wearing a light pink shirt buttoned up until the neck. Her appearance and activity reflects the proper behaviour supported and expected by the state. In the background, the national flag appears above, and a huge crowd of people is displayed as they surround the statue of Sándor Petőfi, the iconic Hungarian poet. He had lived a century before, and was given the name “the poet of the people”, so the socialist political leadership exploited his symbolic figure for their own political purposes. The statue depicted him with the arm lifted up high, and this move is imitated by the people around. The resulting composition has a highly uplifted, and an immensely demagogue character – to fulfil the propagandistic role. Reading a book is represented here as a strangely heroic activity to emphasize the importance of the event.

Today it is interesting to see the painterly nature of the poster maquette and because of the propaganda, the piece is an exciting historic relic as well.