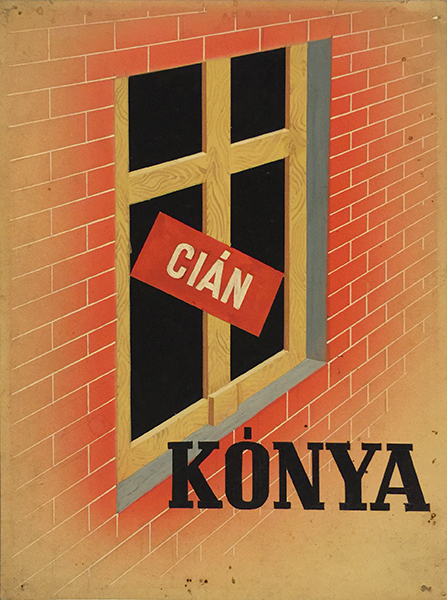 “A cyanide is any chemical compound that contains monovalent combining group CN. This group, known as the cyano group, consists of a carbon atom triple-bonded to a nitrogen atom. [...] Many cianydes are highly toxic. [...] Cyanide is mainly produced for the mining of gold and silver: It helps dissolve these metals and their ores.”
(source: Wikipedia)

The maquette here was created for a commercial poster advertising Kónya cyanide. It was designed in 1948, when – as it is suggested by this work – cyanide was also used in the construction industry.

This artwork is a clear design, depicting a newly installed window in a red brick wall. Behind the wooden framed window there’s only darkness, so the building is still under construction. The name of the brand appears below in black, while the word ‘cián’ (cyanide in Hungarian) is written in white on a red sign at the window. The whole composition is simple and compact, and is based on the bold cut-out. The sides of the image are blurred which leads the viewer’s attention to the core.

This work was created by Mátyás Gaál. Gaál was an important Hungarian poster artist and graphic designer, active between the late 1930s and the 1970s. He won the first prize of the Olympic competition in 1947, so one year later he designed the famous poster for the London Olympics. It also happened in 1948 that he created the poster of the Budapest International Fair. He designed decorative commercial posters in the following decades, and also made agricultural and health care posters in the 1960s and 1970s.

The piece was created during the distinctive poster art of the short lived democracy in Hungary between 1945 and 1949. The democratic period brought an artistic freedom and many prominent artists created powerful works. This poster maquette was one of the concentrated designs of the period.