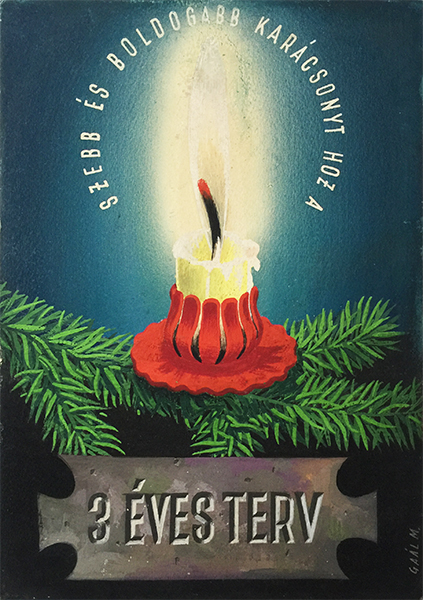 The 3 Year Plan brings a more beautiful and happier Christmas

Mátyás Gaál was a poster designer, graphic artist and important poster collector. He designed playful, decorative compositions for commercial posters in the 1940s and 1950s, but he also created flyers, exhibition designs, emblems, and many other works.

This poster maquette was designed by him for a propaganda poster in 1948. It was trying to cheer people up and comfort them with the promise that „The 3-year plan brings a more beautiful and happier Christmas”. A bright candle appears on a pine branch with the first part of the slogan written around the light in the shape of a halo. The bottom of a metal post or bollard can be seen under the branch with an engraving of ‘3-year plan’. The light of the candle is shining up in darkness like hope after the hard times. The composition is almost strictly symmetric (except for the candle wick and the angle of the pine branch on the left) which was probably aimed to express harmony towards the viewer.

People indeed needed comfort and care after the distresses and hardships of the Second World War, although they couldn’t enjoy such a better life afterwards. This artwork was created in 1948, one year before the socialist regime started. Compulsorily following the Soviet example, three-year plans and five-year plans were introduced to Hungary with the goal of economic growth. However, it's needless to say that the forced industrialization - which was the main focus of most of these plans - caused more damages to the economy than good. The centralised economic system soon proved to be inefficient and inadequate. Today we can see this poster artwork as a meaningful relic from history.