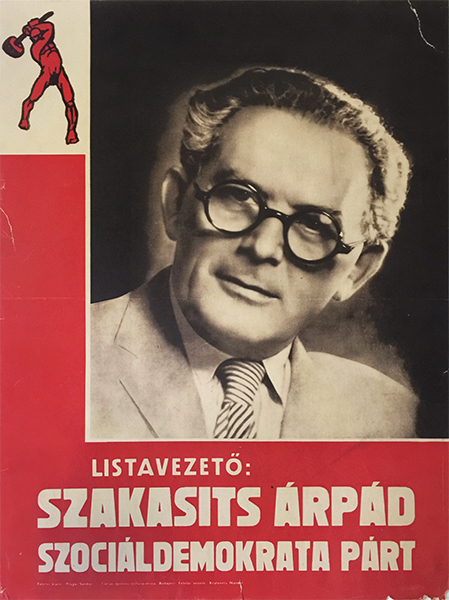 The poster propagates Árpád Szakasits (1888 - 1965) who was a Hungarian Social Democrat, then Communist political figure. He served as the President of Hungary from 3 August 1948 to 23 August 1949.

He was the first Chairman of the Hungarian Presidential Council, which was established on 23 August 1949, as a replacement for the post of the President, in accordance with the new constitution proclaimed in 1949. He served until 26 April 1950. (source: wikipedia.org)

The poster contains the most well-known leftist political symbol, the red hammer wielding man created by Mihály Biró. The figure was the emblem of the Social Democratic Party since Biró’s Népszava poster, which was published in 1912. The symbol embodies the strong working class which finally rises against its suppressors. This was one of the first political posters of him which became really renowned. Moreover, Biró is considered to be the founder of the political poster as a new artistic genre.

The poster was printed for the occasion of the 1947 elections which later were refferred to as the infamous "blue-ballot" elections, were held on 31 August 1947.

The election was a step into the direction of the dictatory. It was the first election when the Hungarian Communist Party managed to win the majority of the votes, but not the absolute majority (despite they cheated). Yet,  their tactics to eliminate their strongest opponent, the Smallholders' Party, proved to be successful. It was in the next election when the Hungarian Worker's Party could get absolute power - only with an election fraud - they also managed to incorporate the Social Democratic Party.  The tactics of the Communist Party is referred to as 'salami tactics', meaning that they sliced up the enemy step by step. In 1949 a new, dictatorial era begun.