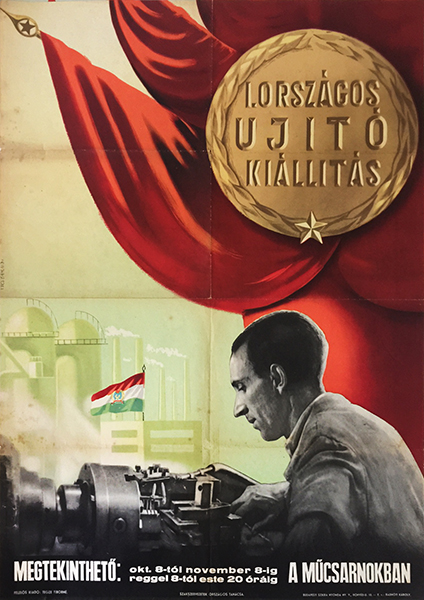 The poster advertises the first National Innovation Exhibition. It was held in 1949, the year when the Communist Party took over in Hungary, hence the composition includes various communist symbols: the huge red flag, the Hungarian tricolor with the communist coat of arms in the background, factories with smoking chimneys, the five-pointed star on the wheat wreath. The style of the poster is socialist-realist, however, it contains some atypical elements.

The worker is depicted in black and white in a hyperrealistic way as well as the machine he is working on. He is looking at the machine, whereas on the typical social-realist posters the workers are usually exaggerated muscular, monumental and idealized figures, who are standing up straight and are staring at the distance, full of hope towards the peaceful, Communist future. Despite the minor atypical parts, the overall effect and message of this image is the same: the man working is happy and peaceful as he contributes to the improvement of the country that suffered severe damages in the war. The opportunity to strengthen the economy can only be provided by the socialist leadership.