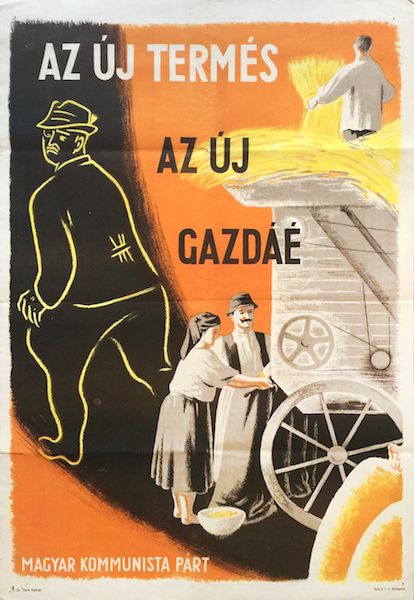 The new crop is owned by the new master - Hungarian Communist Party is a 1945 vintage Hungarian political propaganda poster. It's purpose was to present the significance of the distribution of land and to bring political gain to the party for which, this has been a central goal for many years.

The 1945 land reform was ordered by the Temporary National Government on March 15, 1945. The poster was printed during the following weeks or months.

Szabad Nep, which was the daily newspaper of the Hungarian Communist Party, published the following article in their June 21 issue in 1945:

"The new crop is owned by the new master

The Minister of Agriculture's 5600/945. regulation settles the status of this year's crop harvested from lands that have been redeemed. According to the decree, the crop is owned by the new owner. The individual who has lost the land - or if the land has been cultivated by a leaseholder - the leaseholder is entitled to reimbursement for the economic work he has carried out; in exchange for seed, one, in exchange for plowing, half quintals worth, and in the case of other expenditures, 30 pengos per cadastral acres. For perennial crops, half of this year's yield is the fully reimbursement should be paid to the former owner or the lessee. For vineyards and orchars, the above amount shall be determined by the County Land Management Board. The amount has to be paid by the recipients of land after the harvest."