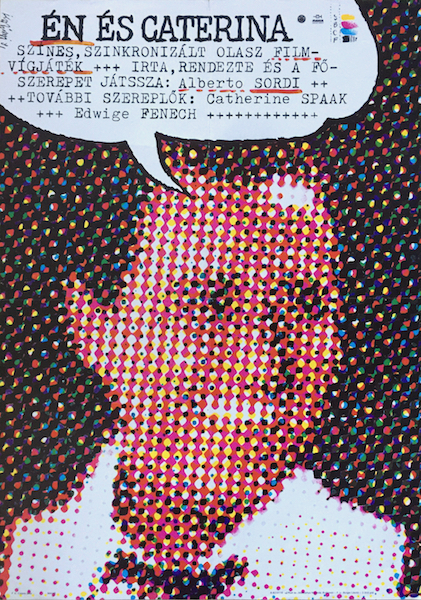 Catherine and I is a 1981 vintage Hungarian movie poster designed by Istvan Kulinyi.

Io e Caterina (internationally released as Catherine and I) is a 1980 Italian comedy film directed by Alberto Sordi.[1] For his performance, Alberto Sordi was awarded with a Globo d'oro for best actor. Enrico has a troubled relationship with his wife, a waitress and his lover. For this reason he decides to abandon all of them and to dedicate himself to peace. In fact he has been interested in a friend's robot waiter, and so Enrico decides to buy one for himself. The robot is called Catherine (Caterina) and serves Enrico to perfection for some time until she starts behaving strangely when Enrico brings other women to his apartment. It appears clear at the end that Caterina was in fact developing human feeling and that made the relationship with her master very complicated. (source: wikipedia.org)