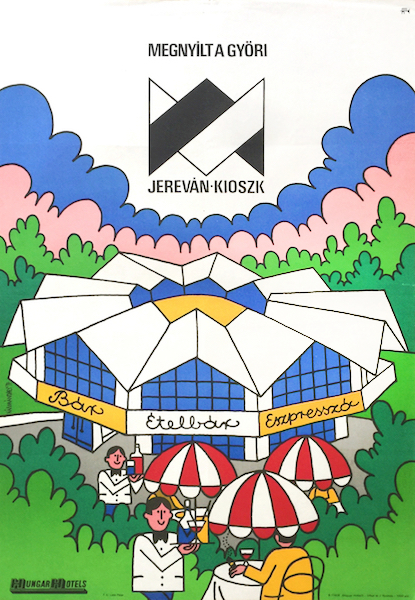 The Jerevan Kiosk Restaurant and Cafe in Gyor is now open

Decorative poster from the 1970s. It was created by Zoltán Kálmánchey, a graphic artist active from the 1960s.

The poster advertised 'Jereván-Kioszk', a bar at Győr. Győr is a colourful town situated halfway between Vienna and Budapest.
Jereván-Kioszk was built in the town in 1977, in the place of the original KIOSZK bar which started operating in 1912. The new building was designed by Andor Horváth and his group in modernist style. The building is situated in the island of Radó, and originally it contained a confectionary, food bar, café and a night bar. You can see some old photos of the original building and its ancestor here: http://moderngyor.com/2012/11/25/kioszk-jerevan-etterem/

The poster is a decorative piece in a lovely cartoon-like character. The building is in the centre of the composition of it, but the white-red striped parazols and smiling waiters are also important elements of the design. This colourful poster has a warm atmosphere, and is a special piece from the 1970s.