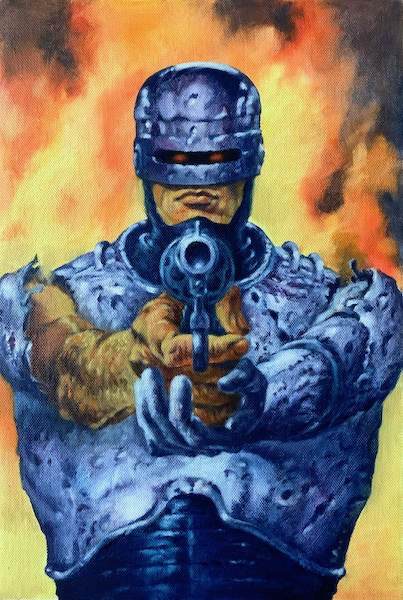 Robocop is a 1989 vintage Hungarian movie poster maquette, which was used as the design of the Hungarian first release movie poster. This original hand painted artwork is from the estate of the artist.

RoboCop is a 1987 American science fiction action film directed by Paul Verhoeven and written by Edward Neumeier and Michael Miner. The film stars Peter Weller, Nancy Allen, Daniel O'Herlihy, Ronny Cox, Kurtwood Smith, and Miguel Ferrer. Set in a crime-ridden Detroit, Michigan, in the near future, RoboCop centers on police officer Alex Murphy (Weller) who is murdered by a gang of criminals and subsequently revived by the megacorporation Omni Consumer Products as the cyborg law enforcer RoboCop. Unaware of his former life, RoboCop executes a brutal campaign against crime while coming to terms with the lingering fragments of his humanity. The film has been analyzed for themes including the nature of humanity, personal identity, corporate greed, and corruption, and is seen as a rebuke of the policies of Ronald Reagan.

The film was conceived by Neumeier while working on the set of Blade Runner (1982), and he developed the idea further with Miner. Their script was purchased in early 1985 by producer Jon Davison on behalf of Orion Pictures. Finding a director proved difficult; Verhoeven dismissed the script twice because he did not understand its satirical content until convinced of it by his wife. Filming took place between August and October 1986, mainly in Dallas, Texas. Rob Bottin led the special-effects team in creating practical effects, violent gore, and the RoboCop costume. Verhoeven emphasized violence throughout the film, making it so outlandish it became comical. Even so, censors believed it was too extreme, and several scenes were shortened or modified to secure an acceptable theatrical rating.

Despite predicted difficulties in marketing the film, particularly because of its title, the film was expected to perform well based on pre-release critic screenings and positive word of mouth. RoboCop was a surprise financial success upon its release in July 1987, earning $53.4 million. Reviews praised the film as a clever action film with deeper philosophical messages and satire but were more conflicted over the extreme violence throughout. The film was nominated for several awards, and received an Academy Award and numerous Saturn Awards.