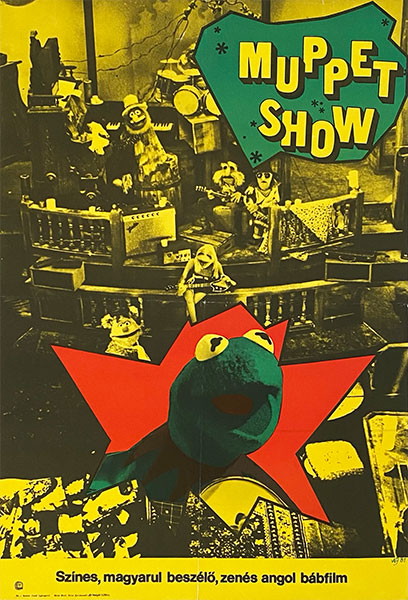 The Muppet Movie is a 1981 original Hungarian vintage movie poster designed by NJ.

The Muppet Movie is a 1979 musical road fantasy comedy film directed by James Frawley and produced by Jim Henson. A co-production between the United Kingdom and the United States, it is the first theatrical film in The Muppets franchise. The film was written by The Muppet Show writers Jerry Juhl and Jack Burns. Produced between the first and second half of The Muppet Show's third season, the film tells the origin story of the Muppets, as Kermit the Frog embarks on a cross-country trip to Hollywood, encountering several of the Muppets—who all share the same ambition of finding success in professional show business—along the way while being pursued by Doc Hopper, an evil restaurateur with intentions of employing Kermit as a spokesperson for his frog legs business.

In addition to the Muppets performers, the film stars Charles Durning and Austin Pendleton, and it features cameo appearances by Dom DeLuise, James Coburn, Edgar Bergen (in his final film appearance), Steve Martin, and Mel Brooks, among others. Notable for its surreal humour, meta-references and prolific use of cameos, The Muppet Movie was released by Associated Film Distribution in the United Kingdom on May 31, 1979, and in the United States on June 22, 1979, and it received critical praise, including two Academy Award nominations for Paul Williams and Kenneth Ascher's musical score and their song, "Rainbow Connection". The success of The Muppet Movie led to several other feature films and television series starring the Muppets across different media. In 2009, the film was deemed "culturally, historically, or aesthetically significant" by the Library of Congress and selected for preservation in the National Film Registry. (source: wikipedia.org)