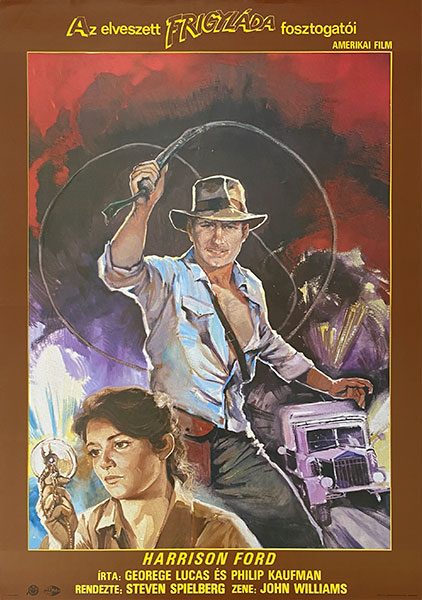 Raiders of the Lost Ark is a 1981 original Hungarian vinate movie poster for the famous American action-adventure film directed by Steven Spielberg and written by Lawrence Kasdan, based on a story by George Lucas and Philip Kaufman. It stars Harrison Ford, Karen Allen, Paul Freeman, Ronald Lacey, John Rhys-Davies, and Denholm Elliott.

The film was nominated for several awards and, among others, won five Academy Awards, seven Saturn Awards, and one BAFTA.

Raiders of the Lost Ark is now considered one of the greatest films ever made and has had a lasting impact on popular culture, spawning a host of imitators across several media, and inspired other filmmakers. The United States Library of Congress selected it for preservation in the National Film Registry in 1999. Raiders of the Lost Ark is the first entry in what would become the Indiana Jones franchise, which includes three more films—Temple of Doom (1984), Last Crusade (1989), and Kingdom of the Crystal Skull (2008)—a television series, video games, comic books, novels, theme park attractions, toys, and an amateur remake. (source: wikipedia.org)