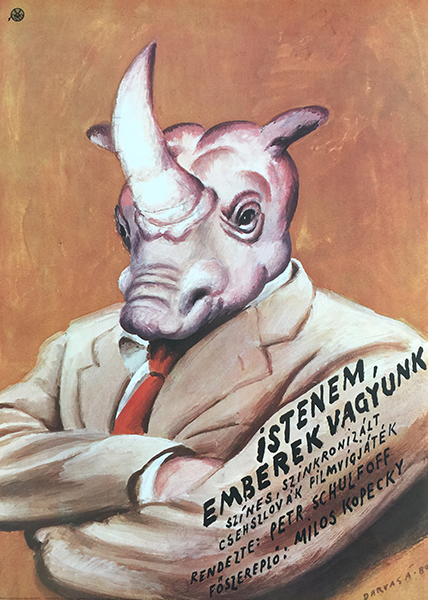 I'll Be Good From Now On, Grandpa

Interesting, surreal poster by Árpád Darvas from the 1980's. The poster was made for a Czechoslovakian movie (original title:   "Já uz budu hodný, dedecku!").  Darvas's design shows how he turned to painting in the late 1970's and early 1980's, and how he was fond of surreal images and shocking associations. The composition refers to the movie's Hungarian title, which can be translated as: "My God, we are human". A commentary on the imdb.com tells about the cultural and historical context of the movie: Well, there is a certain brand of movies written explicitly for a single actor -- or pair of actors -- to showcase their talents. The movie star's name here is Miloš Kopecký -- one of the most beloved of Czech comedic actors of any time. Possibly a choleric person in his own right -- and perhaps also due to that, suffering from heavy depressions in his real life. Would there have been anyone more qualified to play a choleric person on the Czech big screen? Definitely not -- Kopecký is *the* person to do that, and so his friend, director and screenwriter Petr Schulhoff, wrote this movie for Kopecký directly; can you say "tailor-made"? Just as Kopecký was brilliant as an actor, he was controversial as a (public) person: first, in the early 1970s, he lent his talents to the Communist propaganda regime in a series of despicable "documentaries" - only to make a sharp U-turn in the late 1980s, and deliver one of the most famous and memorable anti-regime speeches, illicitly disseminated across Czechoslovakia, as official media would not dare to broadcast it. This was *well* before the 1989 "Velvet Revolution", so Kopecký was putting his career at stake by speaking up. "I'll Be Good From Now On, Grandpa" is the English translation of the strange movie title - but not strange for the director Petr Schulhoff, as he apparently revelled in exactly this type of convoluted titles used for his 1970s comedies. There is something of a separate genre in the Czech 1970s movie-making: "normalisation comedies" - a derogatory title denoting the era of what the hard-line Communist regime back then termed "normalisation" - in their Newspeak, this signified a retreat from Czechoslovakia's democratic tendencies of the late 1960s. (source: imdb.com)