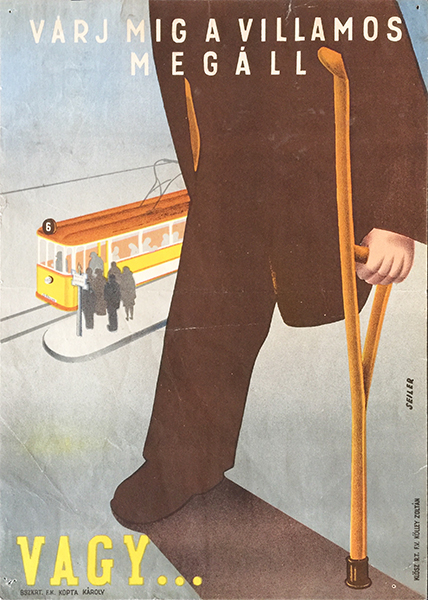 Wait until the tram stops or...

'Wait until the tram stops or'... is a 1947 vintage Hungarian safety propaganda poster designed by Istvan Seiler.

The poster warns passerbys to the dangers of not waiting for the train to stop when crossing the street. The textual information is completed by the visual elements. The text is not finished, it says: 'Wait until the tram stops or...'. The man with the crutches finishes this sentence, there is no need for further verbal explanation. The author of the poster efficiently transferred the intended complex message with a simple text-image combination.

The style of the composition resembles the Art Deco style of the earlier decades with its soft shades and elegant forms.

This piece is from a very important period of Hungarian poster art. After Hungary was occupied by the Soviets at the end of World War II in 1945. Despite the socialist political system wasn't established until 1949, after the war, the talented artists who were forced to leave the country in the aftermath of the Hungarian Soviet Republic of in 1919 (Tanácsköztársaság) could finally return. Most of these talents were designing prolitical propaganda as in this politically intense period, parties found communication through posters very effective. However, there are a few commercial posters known from that period as well which are rare and generally represent high artisitic qualities.