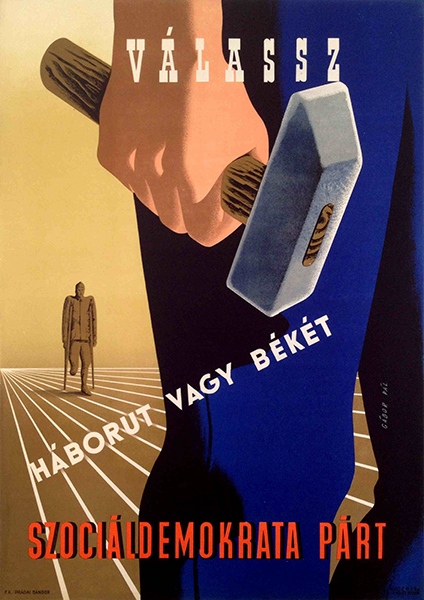 Choose between war and peace

Election poster of the Social Democratic Party from 1947.

The design shows the impressive poster style of the late 1940s, the time when the political posters became clear and impressive. They tried to express one simple message in an easily interpretable way. Here, the message is the choice between war and peace/work. The style of these posters represent a certain continuity with the modernist poster design of the interwar period. Gábor studied at one of the great private schools where the modern tendency was influential: the Atelier art school. The political posters of this era are usually monumental compositions, and so are Gábor's design.

The poster displays the typical characteristics of Socialst thinking. Monumental figure in the front with a hammer in his hand, suggesting that he is a strong worker. At the background, a war veteran is visible who lost one of his legs in the war. The poster implies that if we don't vote for the Social Democratic party, another war will start.