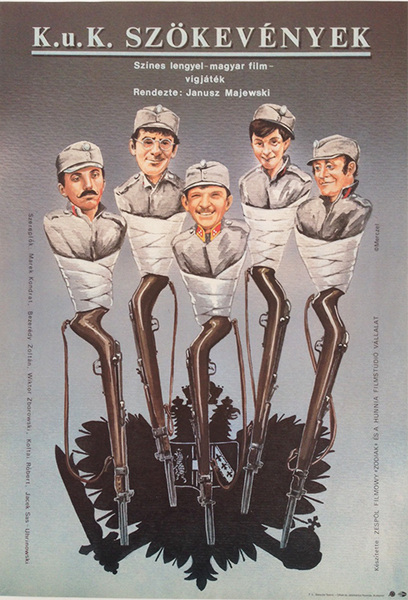 Humorous and surrealistic movie poster created by Péter Merczel, in the popular graphical style of the 1980s.

'The Deserters' is a 1986 Polish-Hungarian coproduction movie, directed by Janusz Majewski.

Set in military barracks in a small town during World War I. The soldiers herded in the barracks are 'politically suspect' mix of characters from all over of the Austro-Hungarian Empire: Czechs, Jews, and even Italians, but officers in charge are Germans. A new lieutenant arrives with the mission to bring order to the unit. He is the sadist, enjoying humiliating the men. Fed up with his behaviour the lower ranks kidnap him one night and string him up in a public toilet. They also make sure that he fouls up during the inspection. Eventually the five ring leaders are imprisoned. They escape and end up in Budapest posing as guards of veterinary surgeons. They are caught and sent back to face a court martial and their old tormentor. (source: imdb.com)

The qrotesque composition of the poster reflects the satirical character of the movie. The black shadow below shapes the great coat of arms of the Austro-Hungarian Monarchy.