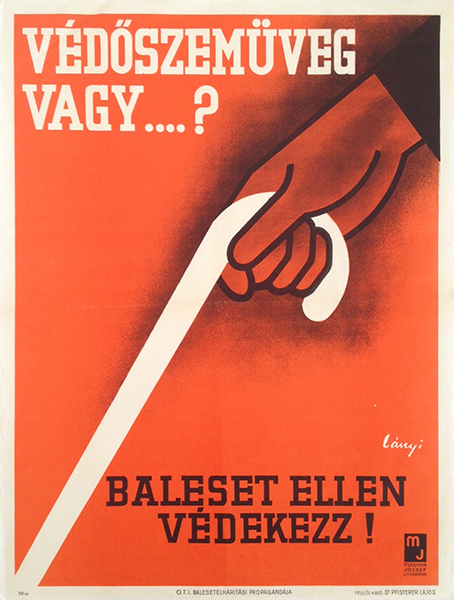 Protective glasses or....? Protect yourself from accidents!

Very decorative work safety propaganda poster by Imre Lányi, who mostly designed modernist commercial posters in the 1930s. Lányi applied the clear and powerful modernist poster style of the 1920s, which was introduced in Hungary by Kassák, Bortnyik, Berény and Irsai. Lányi’s posters were not as meticulous as Bortnyik’s. He used realistic depictions of the advertised product but arranged according to the modernist style, that is, diagonal. As a background he often used a single strong color as background.

In the second half of the decade, Lányi often cooperated with György Radó on commercial posters; they created poster designs for the famous Tungsram company, mostly for promoting their lightbulbs. They also designed posters for fashion products and the newspaper Pesti Napló was one of their regular clients as well. They signed their works as Radó – Lányi or as ra-lá.

This particular poster was designed by Lányi alone and is a great modernist work. The red background, the  diagonal composition and  the typography are all typical modernist elements. The design  is very witty: the text on the top says: 'Protective glasses, or....?' The answer is the image itself: if one doesn't wear protective glasses might become a victim of an accident and  get blind. This relatively complex message is told by just a hand holding a white stick. The text in black says: 'Protect yourself from  accidents!'.