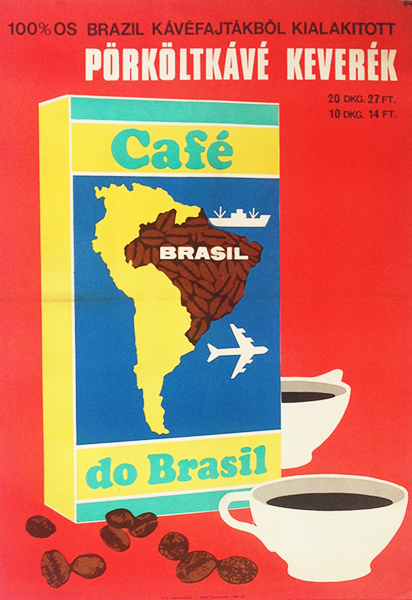 Decorative poster for promoting a coffee brand: Café do Brasil. These type of quality coffee brands had not appear until the 1960s when a larger variety of goods became available on the market. Prior to this period, at the beginning of socialism there was a lack of products and everything one could get was very low quality. The advertisments of that time reflect the same atmosphere. However, in the 1960s a very slow rise of the economy had began and more goods became accessible for the people. For example in the 1950s almost only chikory coffee or other coffee substitutes were available, but from the 1960s different brands offering real coffee appeared on the market.

The red and yellow combination was often used on coffee posters. The vivid colours give an energetic touch which is how coffee ideally makes people feel. This poster is further enhanced by the green because the product was said to be from 100% Brazilian coffee. Therefore the colours allude to Brazil and the picture on the box of coffee shows South America where the territory of Brazil is indicated with coffee beans. The images of the ship and plane clarify that thanks to the modern transporting technologies, Brazilian coffee beans are delivered to Hungary. This gives credibility and eases people's doubts about the origin of the coffee.