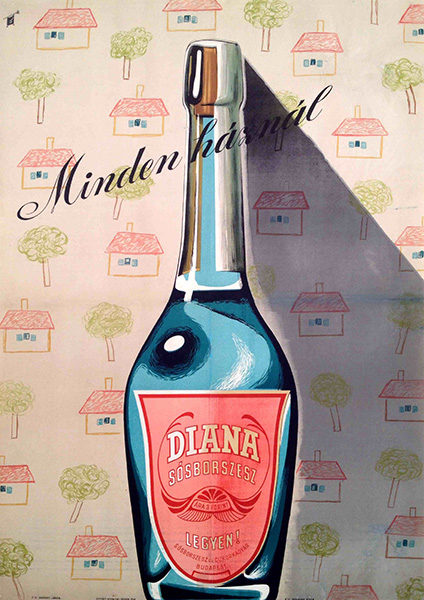 Diana Rubbing Alcohol at every house!

Beautiful commercial poster from the late 1940's or 1950's. The poster was very likely designed by István Köpeczi-Bócz.

The rubbing acohol is basicly a mixture of fine alcohol, oils and flavors. The rubbing alcohol was used against rheumatism, for disinfection and for general health care. At the end of the 19th century, a succesfull pharmacist, Kálmán Brázay developed the "rubbing alcohol" as a new product. Later the "Diana" became the most famous Hungarian brand. Their advertisements often used the slogan "At every house Diana...". Zoltán Kónya created many posters for the firm in the 1920's. This poster was definately printed after 1945 and before 1960.

This poster is extremely decorative, the bottle is beautifully painted. The typography of the text, the wallpaper-like background and the bottle appear in perfect harmony.