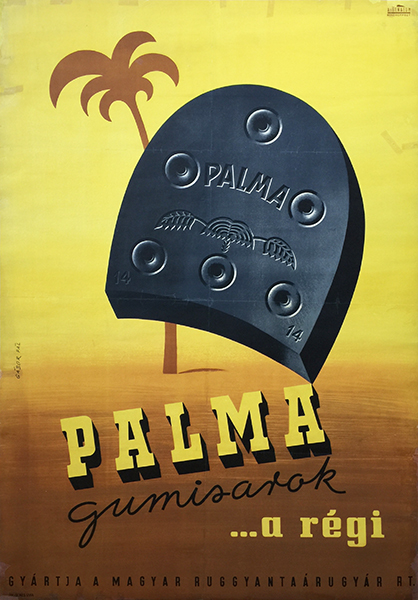 Palma rubber heels ...are the same

Fine, backed on linen, restored tears and paper loss along the borders.

The author of this poster, Pál Gábor was among the most important graphic artists in the history of Hungarian poster, despite he never finished any official school on the field. However, he did learn from the greatest masters, for example István Irsai or Victor Vasarely.

Gábor won a tender in 1937 and he got a chance to visit the world exhibition in Paris. He returned to Hungary three years later with great experiences that his graphic designs benefited from. After the the Second World War he got numerous commissions. In the post-war era artists and politicians were aware that posters had important role in mass communications, therefore several propaganda, political and commercial posters were made. The method that György Konecsni developed in the 1930s was widely applied by these artists in the 1940s, following the war. It was a metaphoric depiction with associations combined with surrealistic elements in a very decorative way.

The first advertisement designed by Pál Gábor was published in 1936. At that time he worked as an architect and a graphic designer simultaneously and both disciplines played an important role in his work; he made compositions where the carefully constructed structure gets great attention both on his figurative and typographic works. He had a great interest in precisely composed typography as well.

In the 1940s Gábor designed many political and commercial posters. He became the graphic designer of the rubber factory that produced Emergé, Laticel and Palma products. This position was occupied by Róbert Berény in the 1920s and ‘30s what highlights the fact that the company was keen on producing high quality advertisements designed by the greatest artists of the time. Gábor made posters for the products of the company as well as designed covers for the magazine of the factory, Kerék (Wheel).

This advertisement was made for Palma that was producing quality rubber soles and heels for shoes. The slogan says: Palma rubber heels...are the same. The brand had a long history, the production of the rubber heels started in 1909, hence the slogan alludes that after two world wars and serious changes that affected economy, society and everything, this product is still the same quality. In order to support this statement, Gábor deliberately made a design that resemble the style of the earlier times.

This poster is a very decorative and elegant one. It follows the creative and imaginative style that focuses on the promoted object, what was a characteristic of Gábor’s works. He also often opted for a ‘free’ composition, where the elements of the image are floating on the picture. In this case the advertised product, the rubber heel is floating in front of the brownish yellow background, the stylized image of a beach with the silhouette of a palm tree (referring to the brand name, Palma). The rubber heel is carefully drawn, it is very realistic with soft shades and clear details. It is in a strong contrast with the simplicity of the background. This contrast further emphasizes the advertised product. The typography is arranged diagonally what resembles to the constructivist tradition.