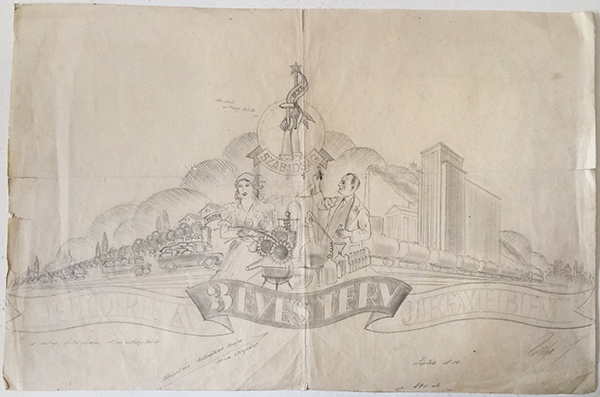 After the Second World War, between 1945 and 1948 there were some attempts to maintain democracy. The Communist Party gradually took over. In the year of this sketch, they were not yet in power officially, but by this time they managed to slice up the opponents and it was clear that sooner or later they would take over. The three year plan was the very first economic plan in Hungary that was based on the Soviet model. The ideology behind it was to recover Hungary from the severe damages it suffered in the war, however he plan did not last for more than two and a half years.

The socialist regime completely reorganized the economy of Hungary. They introduced seven five-year plans within 20 years (besides a one-year and a three-year plan). These plans were all made with the goal of economic growth but it's needless to say that the forced industrialization and the actions related to agriculture caused more damages to the economy than good. According to the socialist plan Hungary (a traditionally agricultural country) was subject to a transformation to industrial country

The visual elements on this sketch contain the major symbols related to a developing economy: grape, train, sunflowers, factories with smoking chimneys, cars packked with harvested goods, happy workers, etc. - all under the aegis of the 3 year plan.