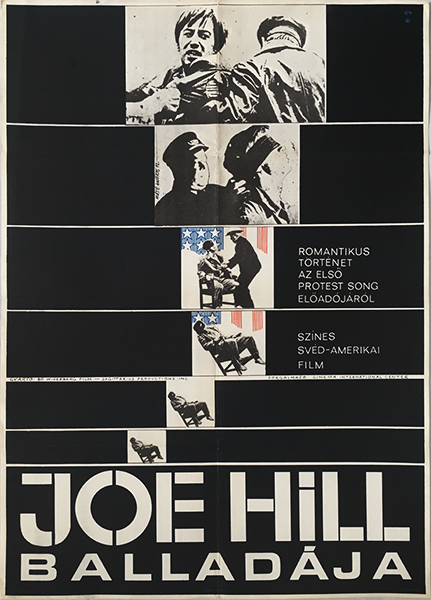 Joe Hill is a 1971 biopic about the famous Swedish-American labor activist and songwriter Joe Hill, born Joel Emanuel Hägglund in Gävle, Sweden. It was directed by renowned Swedish director Bo Widerberg and is a dramatision of Hill's life, depicting Hill's arrival as a poor immigrant in New York in 1902, his involvement with the Industrial Workers of the World (IWW), and his trial for murder, during which he defended himself. He was convicted on circumstantial evidence and, despite many pleas for mercy, including two from President Woodrow Wilson, he was executed by firing squad in Salt Lake City, Utah, on 15 November 1915. It stars Thommy Berggren as Joe Hill, while the rest of the cast were mostly unknowns in their first film roles. It is the only film that Widerberg made in the US. The film won the Jury Prize at the 1971 Cannes Film Festival. Joe Hill was mostly unavailable commercially for nearly four decades (though occasionally shown at special film club screenings in Sweden) until a restored and digitally remastered version was produced in 2015 by the National Library of Sweden. It is now available on DVD. The distributor is Studio S Entertainment, Stockholm. (source: wikipedia.org)