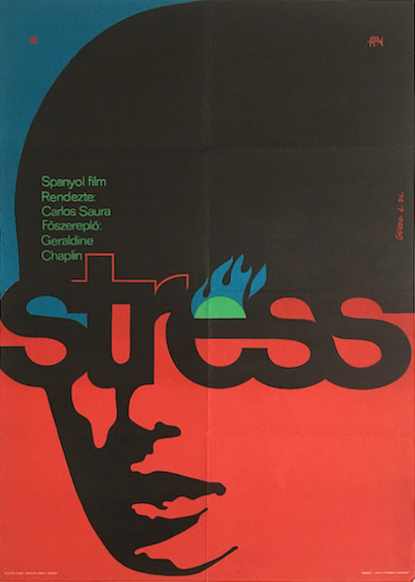 Stress is a 1976 Hungarian movie poster designed by Lajos Gorog.

Stress Is Three (Original title: Stress-es tres-tres) is a 1968 Spanish drama film directed by Carlos Saura. The film stars Geraldine Chaplin and Fernando Cebrián as a troubled married couple. Their marital problems are partially a consequence of Spain's rapidly modernizing consumer society. Saura explains that his film is "the study of the crisis in a seemingly developed society, the crisis of the modern Spaniard who, underneath the new veneer, is still a medieval man, who still has working within him the old taboos and moral repressions from his religious past." The film is experimental in nature, whereby Saura moved away from several of the formulas of his previous two films, Peppermint Frappé and La caza. Saura noted, "At the root of it I had the sense that in Peppermint Frappé I was very constrained by story and I wanted to unbind myself. So, I made Stress Is Three, Three as a kind of liberation. (source: wikipedia.org)